Instagram Users Describe the Ups and Downs of Living With Bipolar

This May Be the Secret to Remembering Names and Faces, According to Researchers

Does a Perfect First Date Actually Exist? Here Is What the Experts Suggest

William Shatner, who famously portrayed Captain James T. Kirk on the television series Star Trek from 1966 to 1969, blasted in space in real life. Shatner was one of four astronauts aboard the New Shephard, the flagship of the Blue Origins fleet.

In an interview with CNN last week, Shatner mused to host Anderson Cooper, “What will I see when I’m out there?” After playing a space commander on the popular tv show, which still enjoys a cult following, Shatner became fascinated and longed to experience it firsthand. Now, at the age of 90, Shatner realized this long-held dream–and became the eldest person to blast off into outer space.

“They used to say that if man was meant to fly, he’d have wings. But he did fly. He discovered he had to.”  – Captain James T Kirk.

And so today, Captain Kirk got to boldly go where…well…just a handful of people have gone before.

We captured images along every step of this fantastic journey.

About the New Shepard

Blue Origins name the New Shepard after the legendary American astronaut Alan Shepard. Shepard joined the Mercury mission, making him the first American to make it to space. In fact, it’s not a surprise that the company named this space vehicle after this trailblazer.

Engineers designed the capsule to hold a crew of up to six people on each mission. Besides being roomy, they also designed large windows to enable the passengers to enjoy the majestic views.

In addition, they designed it with wedge fins to power it for vertical take off and landings, making it reusable with routine maintenance from one trip to the next. Besides the wedge fins along the bottom, the aft fins offer stability for a smoother takeoff and help steer the craft as it lands.

The New Shepard’s engine achieves a speed of up to Mach 4, with the ability to throttle down to only five miles per hour as the landing gear engages. Until now, rockets were not reusable, but these technologies changed that! 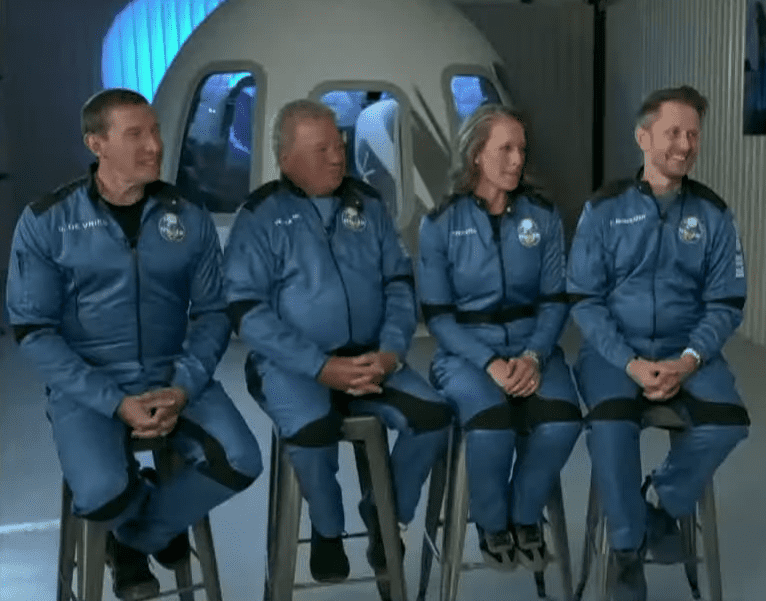 William Shatner attended training and briefings before he traveled to space. Here, he recently posed with the other astronauts who joined him on the New Shephard. Seated from left to right are De Vries, Shatner, Powers, and Boshuizen. 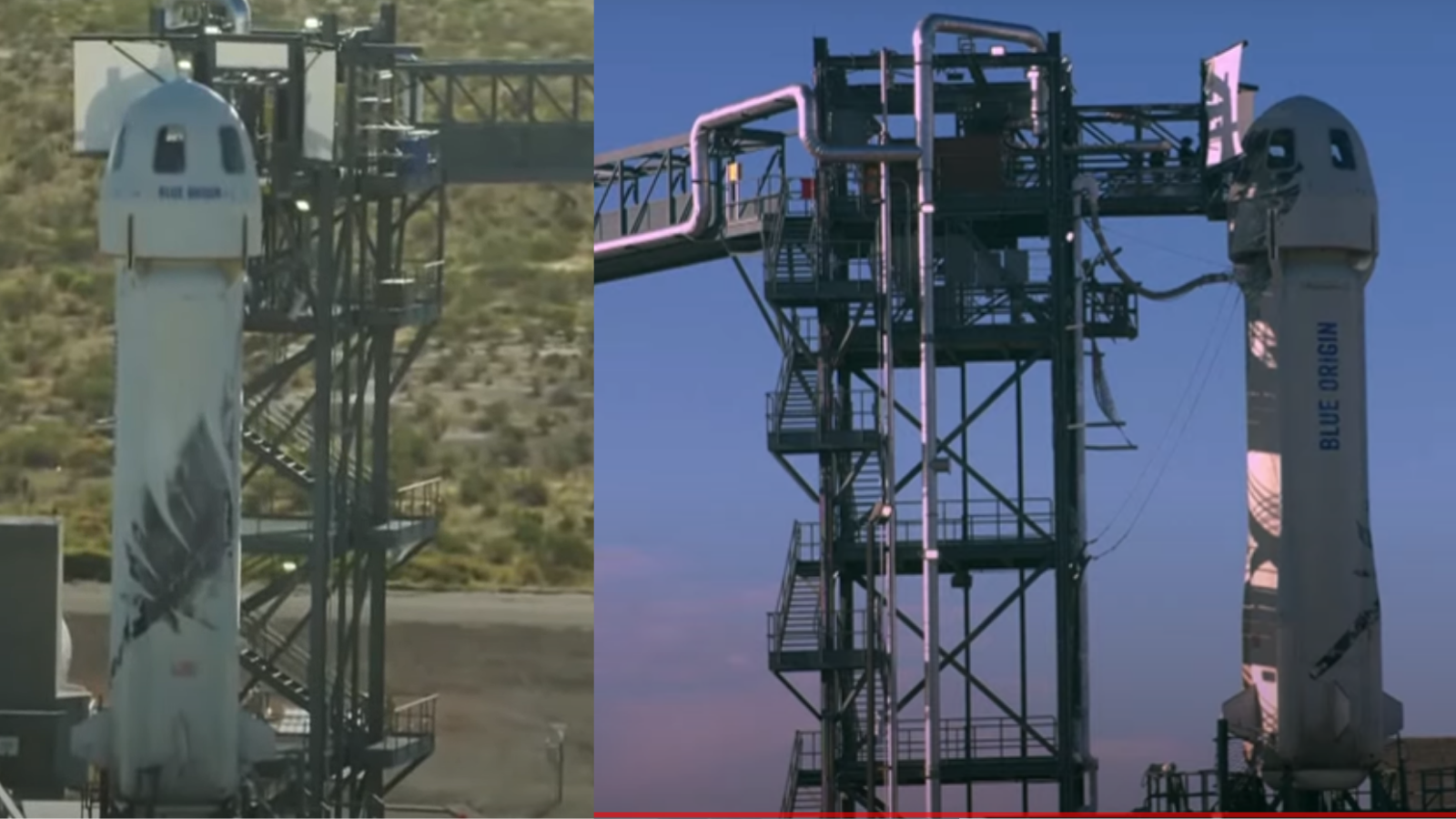 Here, you can see the Blue Origins New Shepard from two different angles on the flight deck in West Texas. The astronauts boarded and awaited as the clock counted down on this historic journey. The astronauts rode in the capsule at the top of the rocket. 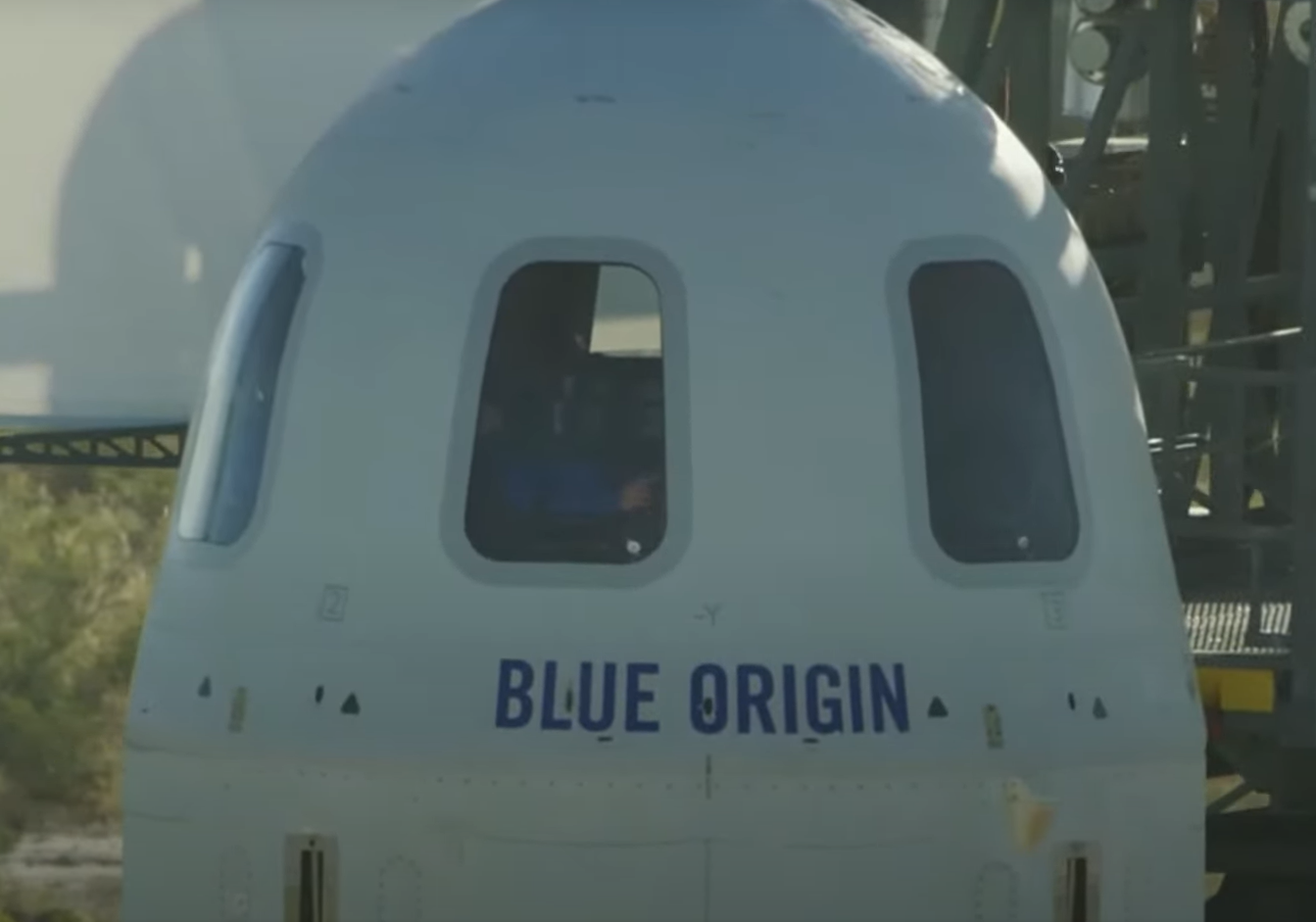 This image shows the astronauts inside the capsule as they awaited the lift off. 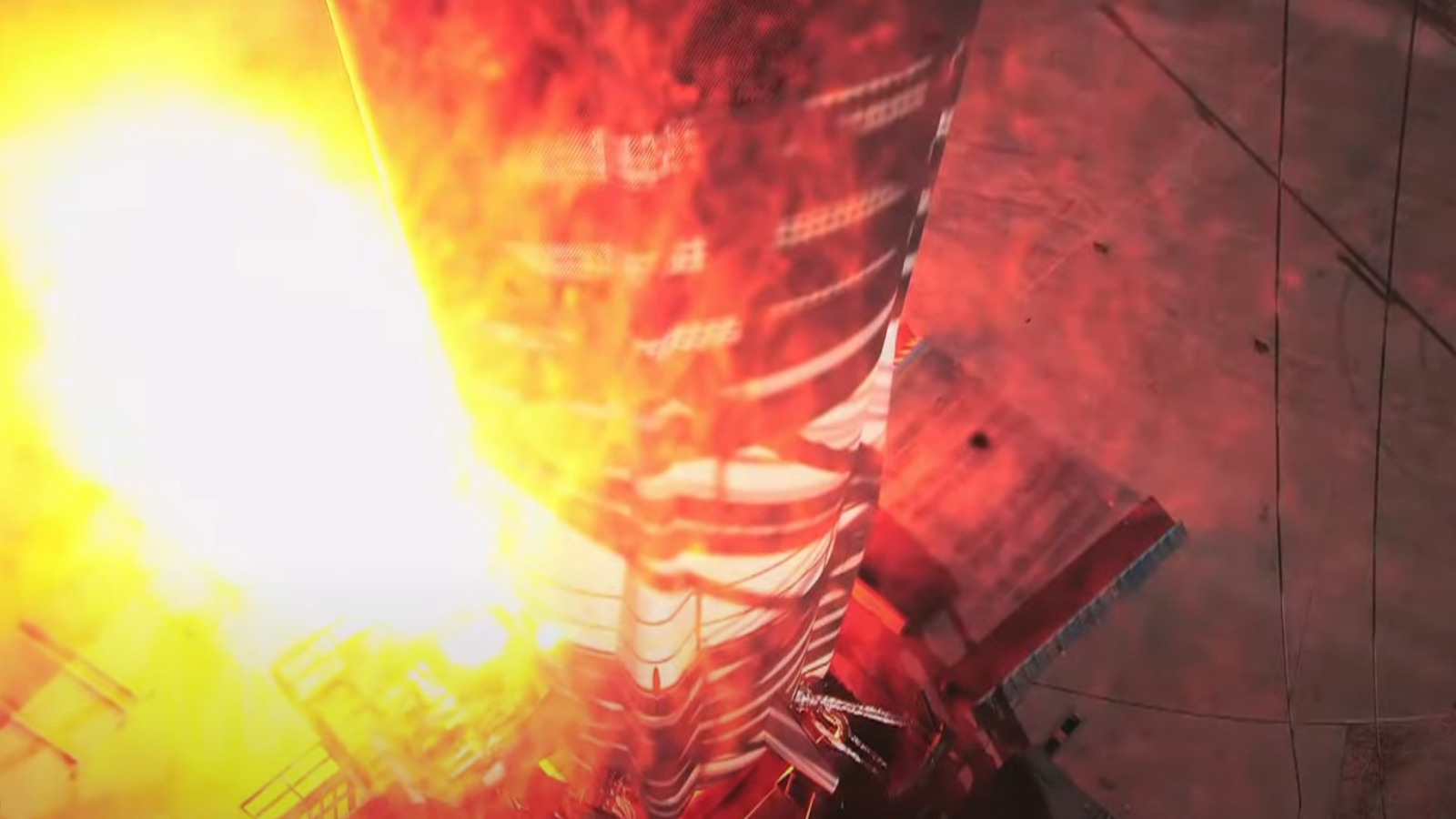 After a short delay, the New Shepard lifted off in a fiery display at approximately 9:50 am (Texas/central time zone). 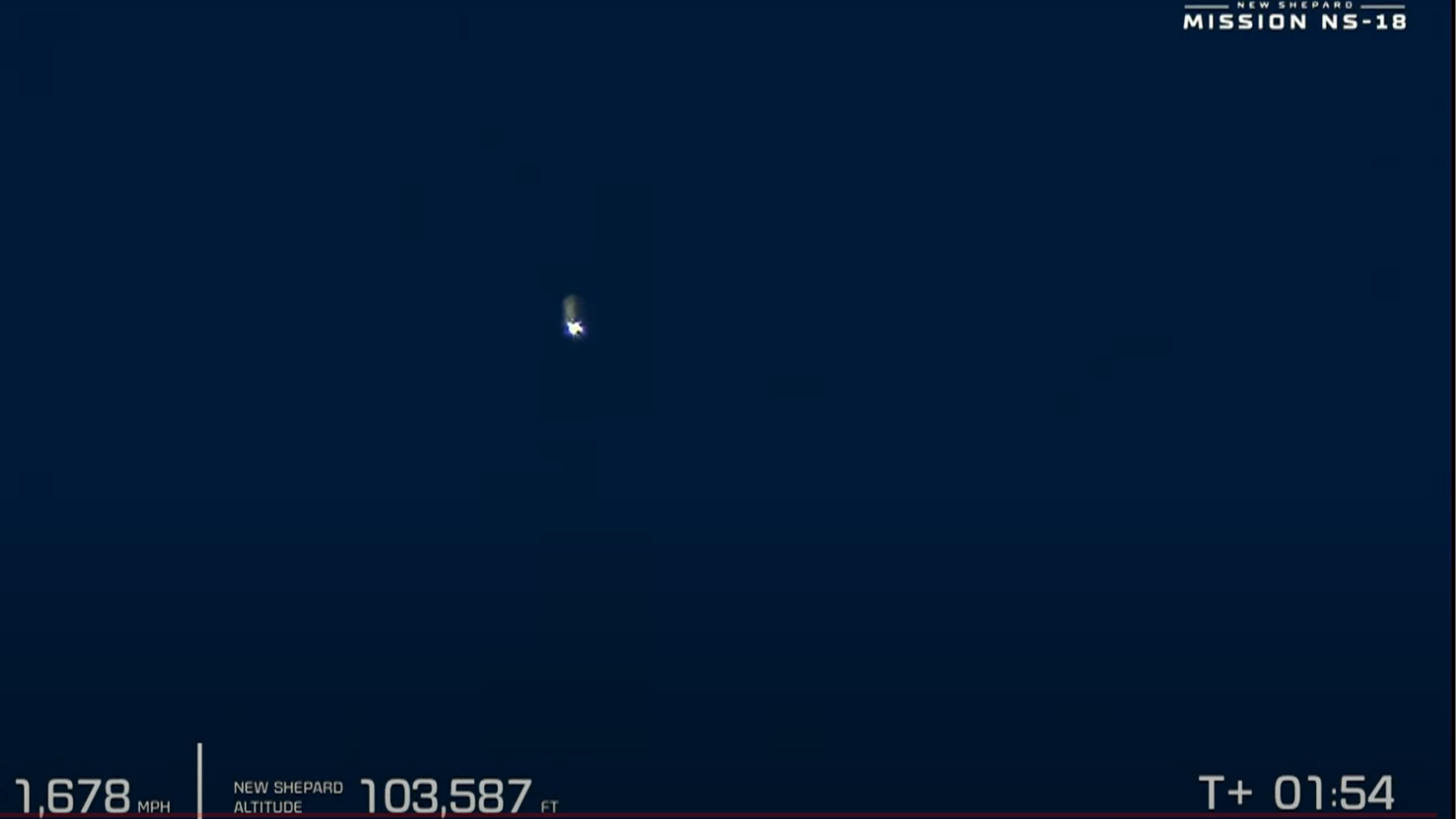 The ground crew and onlookers erupted in cheers as the New Shepard made its ascent high above them. 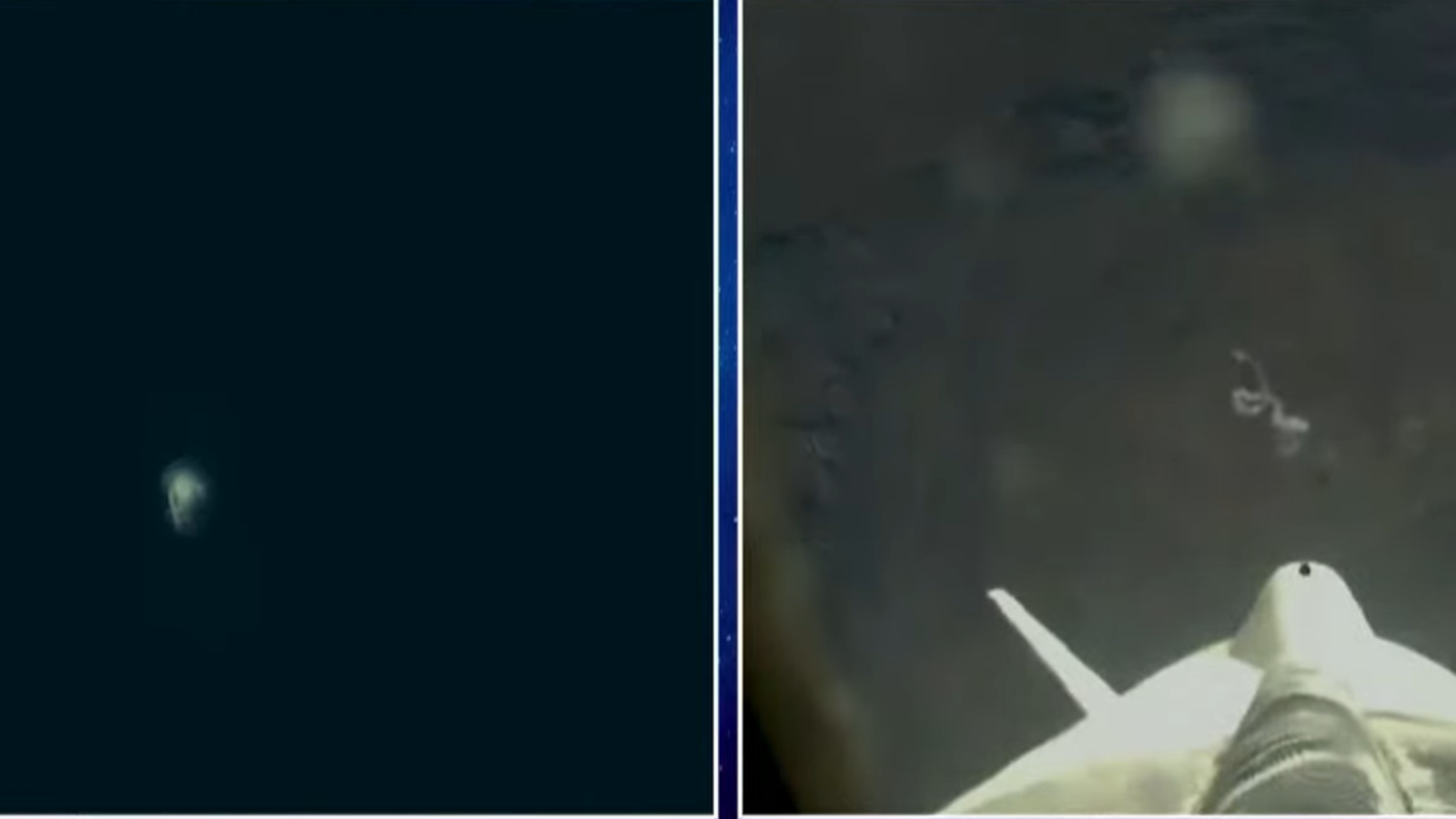 The New Shepard rose through the air towards the “Kármán Line,” the demarcation marking the boundary between the Earth’s atmosphere and space. The flight lasted for about four minutes before they began to come back to land on Earth.

The super cool thing about the New Shepard–it is a reusable rocket. Unlike older technologies that disintegrate upon re-entry into the atmosphere, the rocket separates and comes back for a clean landing while the capsule containing the astronauts continues its journey. In this photo, you see the New Shepard touching down on the left. On the right, the capsule begins to re-enter the Earth’s air space. 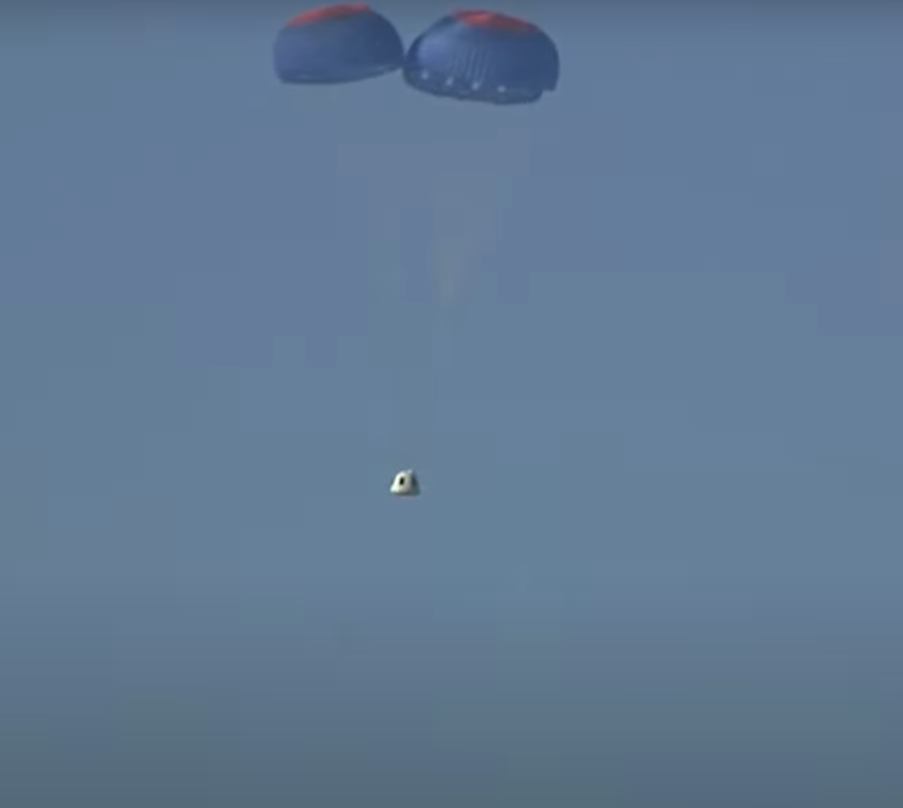 Meanwhile, the capsule became more clear to the cameras and the shuttle team who awaited below. 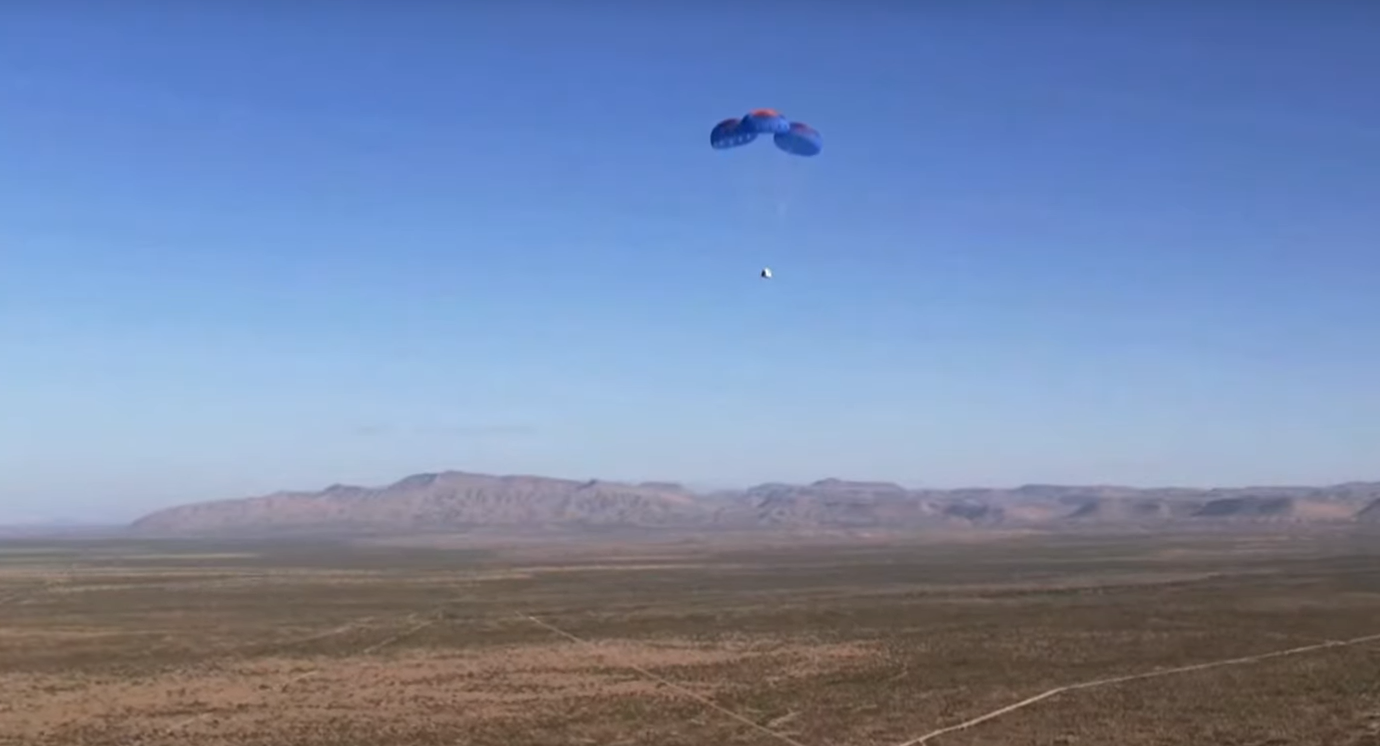 The west Texas desert provided a stunning backdrop as the parachutes opened, giving William Shatner and crew a safe, soft landing. As the capsule descended, Shatner quietly made this comment:

“That’s unlike anything I’ve ever experienced before.”

The capsule landed safely, and in this photo, they await the recovery crew to assist them with exiting the capsule. 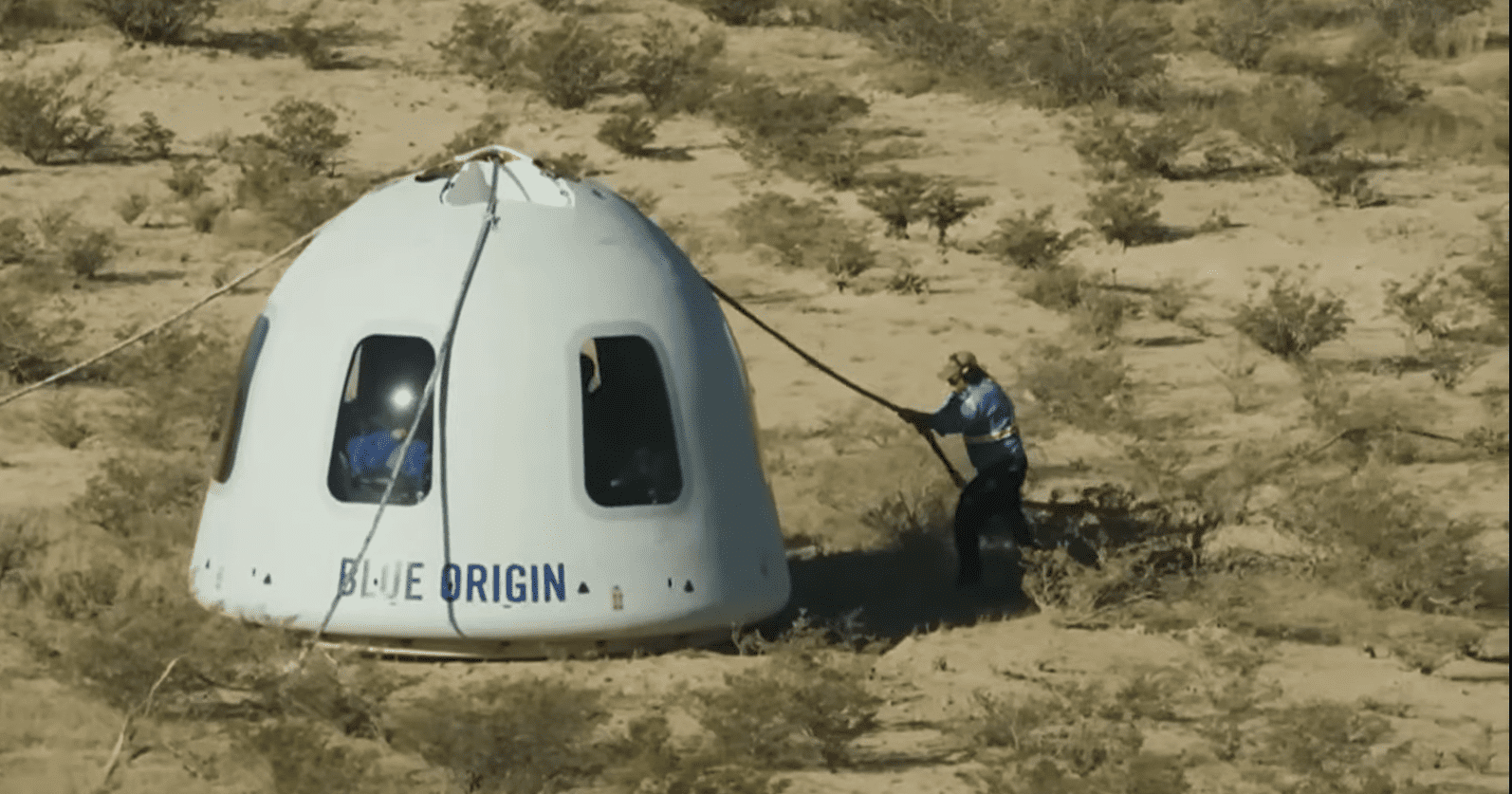 The ground crew performed a quick wellness check and received a thumbs up from all four astronauts, and released the parachute from the capsule. 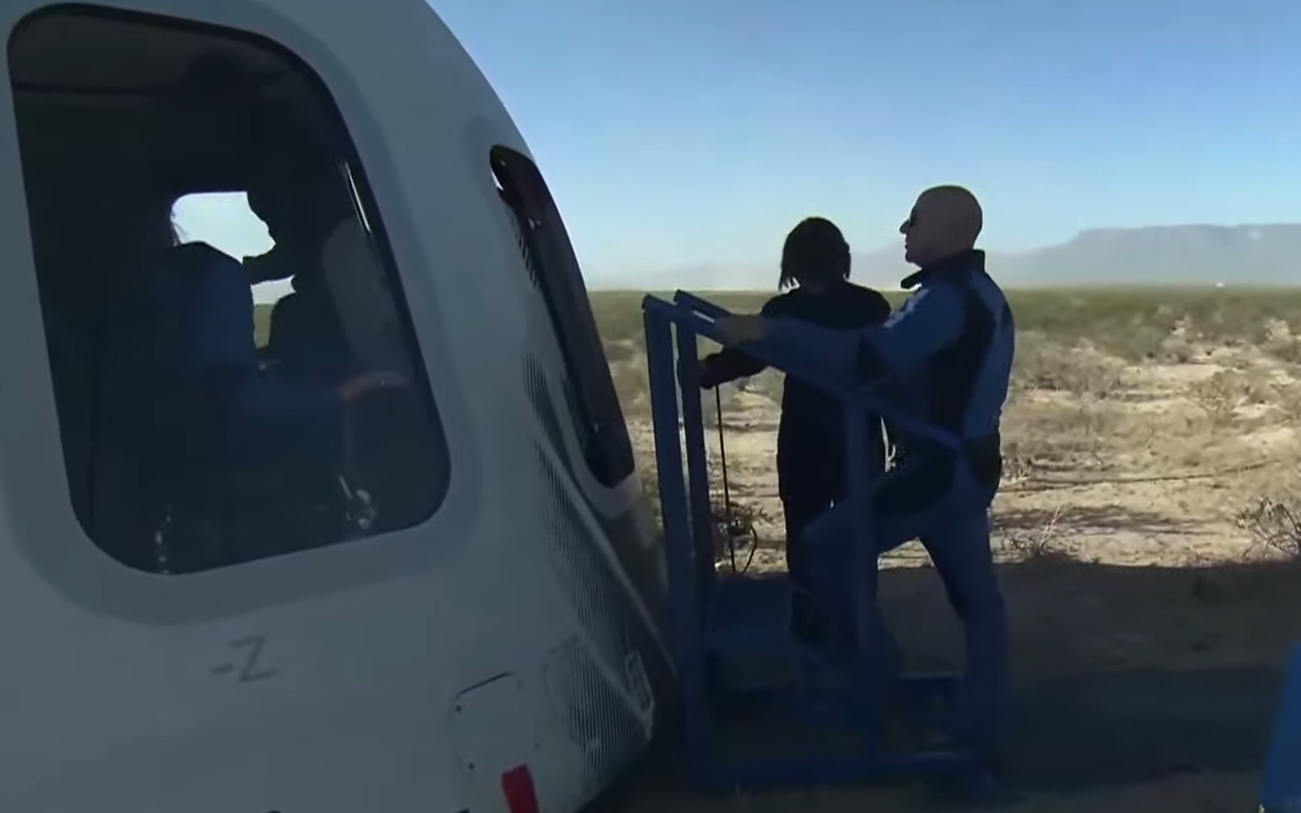 The tech company billionaire and Blue Origins founder, Jeff Bezos, arrived at the landing site to welcome the astronauts back to Earth and congratulate them. 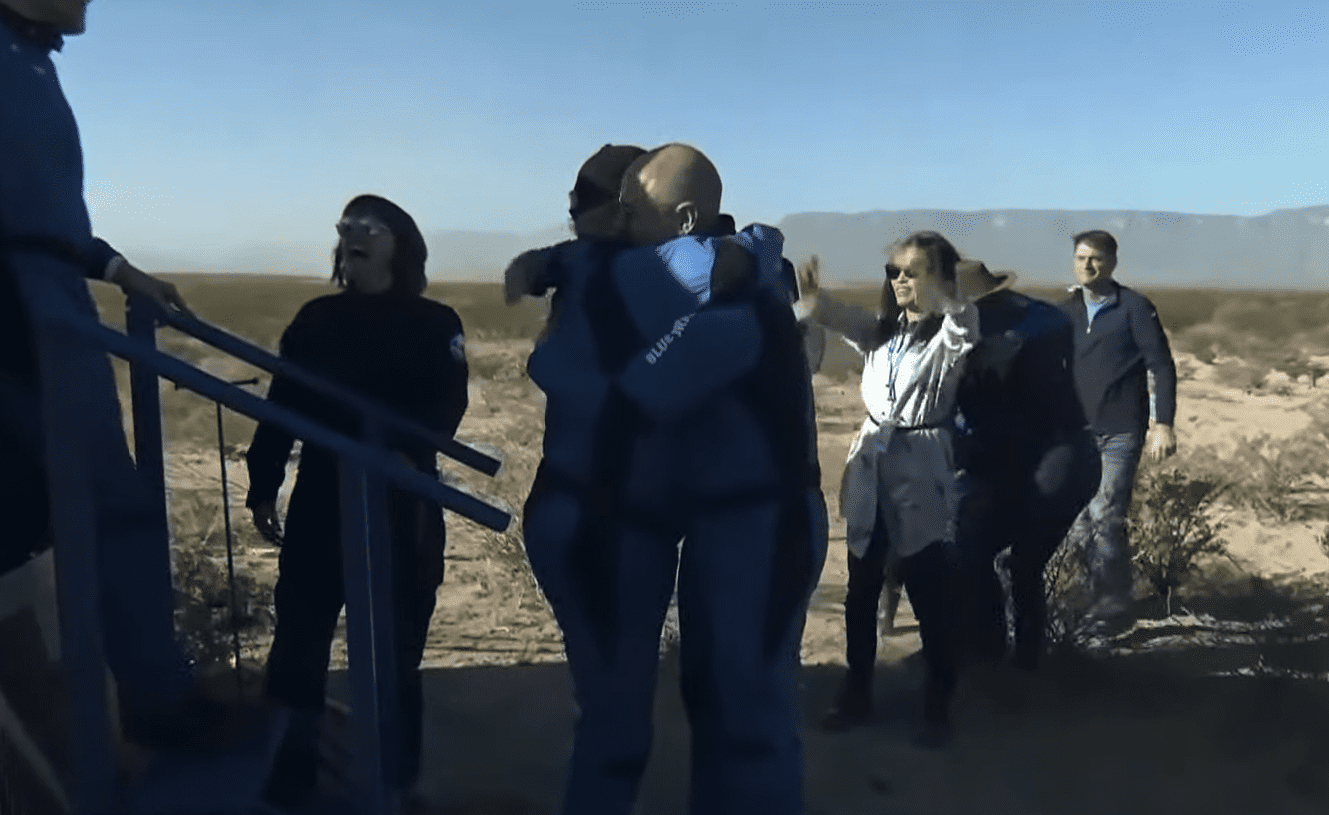 Bezos and Shatner shared a quick celebratory hug right outside of the capsule.

But what did Shatner say?

Shatner told Bezos this of his gift of sending him on this journey.

“What you have given me is the most profound experience I’ve ever had…extraordinary. Extraordinary.” 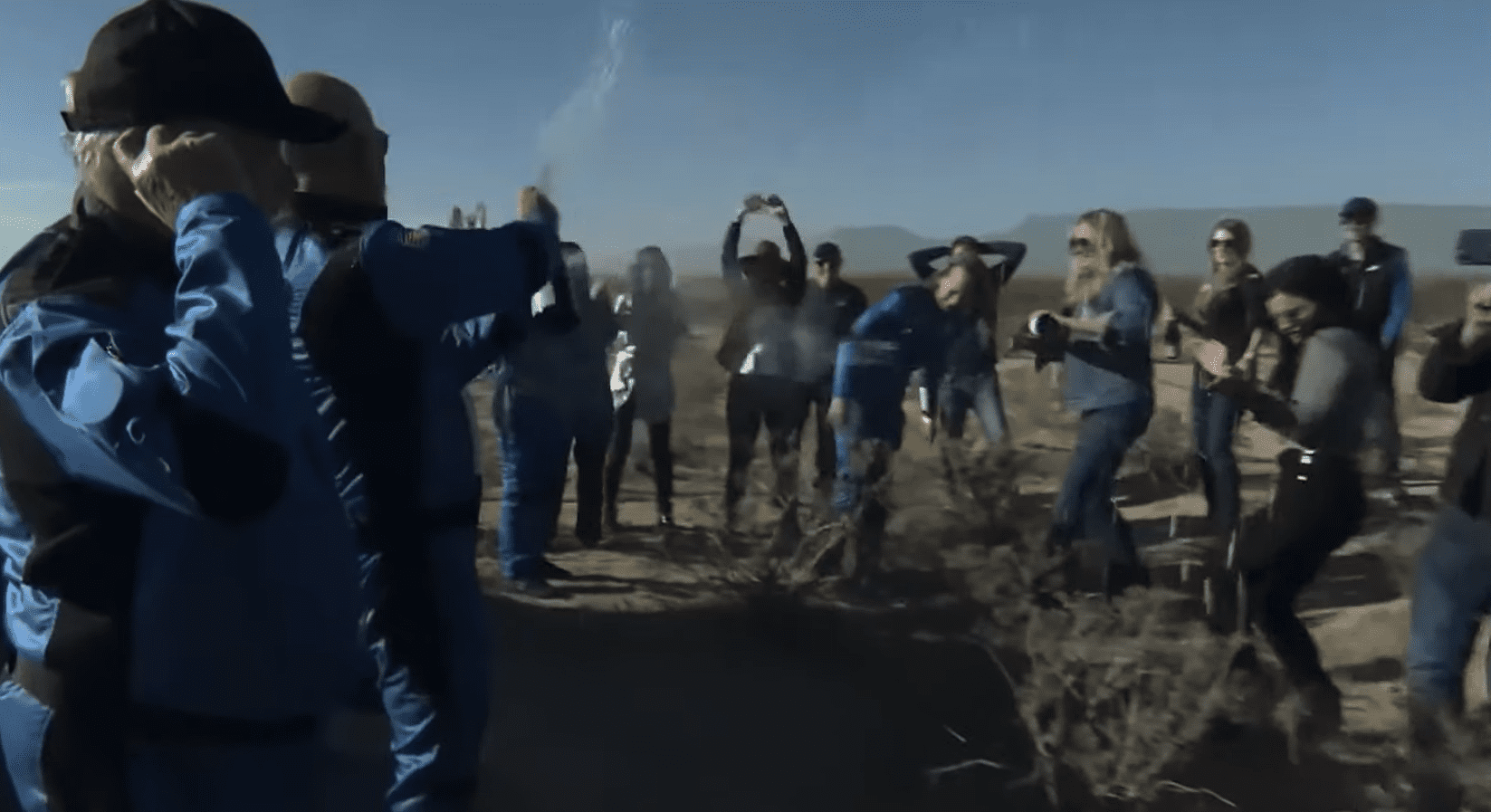 Bezos brought along the bubbly. Indeed, seeing Captain Kirk and the other astronauts come back from a successful trip to space is a cause for celebration. 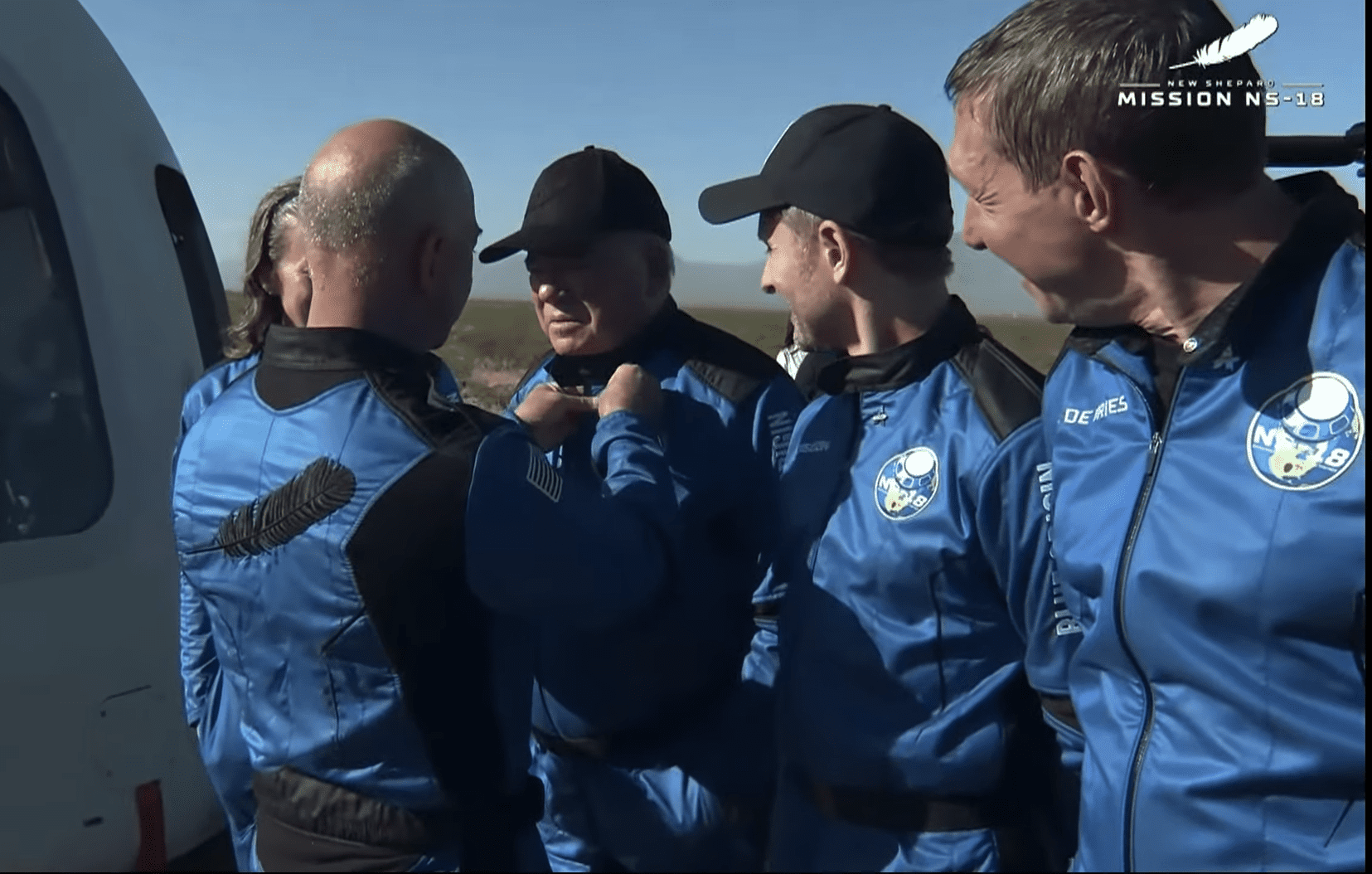 William Shatner Made History on the Blue Origins Flight, Becoming the Eldest Person in Space

According to the Blue Origins website, Jeff Bezons long held a fascination with space travel and the unlimited possibilities it represents. he envisioned a future where “millions of people are living and working in space to benefit Earth. In order to preserve Earth, Blue Origin believes that humanity will need to expand, explore, find new energy and material resources, and move industries that stress Earth into space.”

By engineering reusable rockets, he is building the foundation of a company that will serve customers across all sectors. From space tourism and commercial use to defense contractors to scientific research, they plan to be able to serve one and all.

Going to space was the dream of a lifetime for William Shatner. Now, over fifty years after the conclusion of the Star Trek series, the man who played Captain Kirk achieved that goal.

The Essentials of Kripalu Yoga