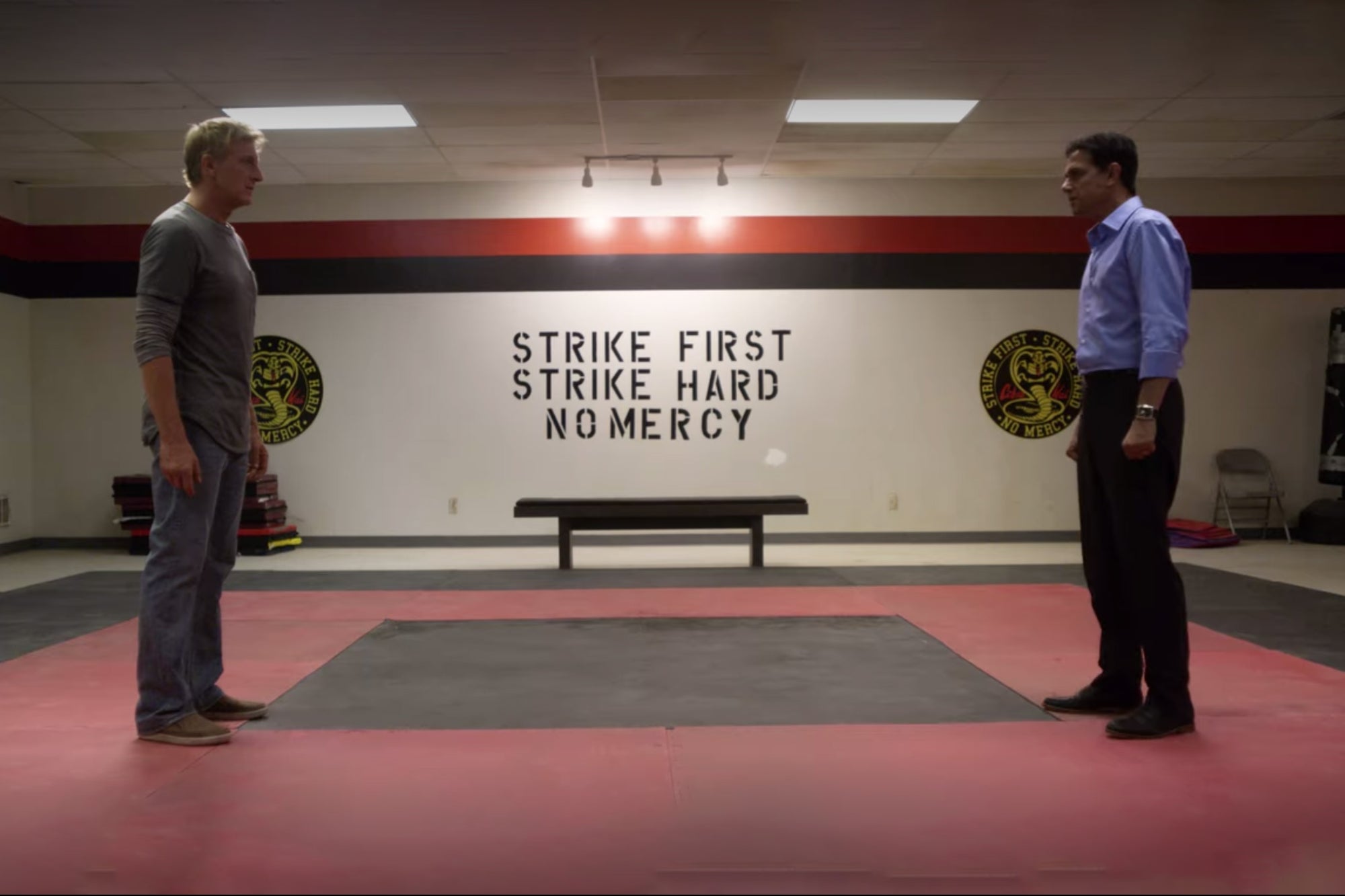 In 2020 Netflix acquired the rights to Cobra Kai which originally premiered on YouTube Red. I remember watching a trailer for season one back in 2018 and it piqued my interest. From the very first episode, my family and I were hooked, but ever since it moved over to Netflix it’s surged in popularity.

It was a blast from the past, a breath of fresh air, and it had creative writing, a good story, powerful life lessons, and jokes that were actually funny. Cobra Kai had it all. In my childhood, I liked the Karate Kid, but Cobra Kai took things to a whole other level. In a word – fantastic.

But what can a tv show teach us about leadership? Turns out, quite a lot. Here are seven leadership lessons from Netflix’s hit show Cobra Kai.

1. Leaders must be authentic

Despite their very different approaches to the martial art that intertwined the destinies, if there is one word to describe both Johnny and Daniel it would be authentic. Johnny might be crass, politically incorrect, and even downright mean from time to time, his heart is in the right place. He wants to help his kids be strong. He tells kids that the world isn’t always a nice place. You will meet bad people and that’s why learning martial arts can be so beneficial. That’s what the original Karate Kid was all about. Martial arts build character, confidence, courage, and a competitive drive, all things needed in life and business.

Related: 10 TV Shows Every Entrepreneur Should Watch on Netflix

Richard Branson, Sam Walton, and Henry Ford are three CEOs that understood that authenticity goes a long way and the success their companies had reflected that.

In one episode of the second season, Daniel and Miyagi-do put on a karate demonstration to introduce people to their dojo at a local fair. Johnny gets wind of this and decides Cobra Kai will put on their own demonstration. Miyaki-do’s was calm and gentle. Cobra Kai’s was way over the top — fireworks, loud music, and pure power. That’s what Cobra Kai was all about and it set them apart from their competition. I remember looking at my family and said, “I’m joining Cobra Kai.” I even went so far as to go online to get a Cobra Kai shirt for my son who did Karate at the time.

In business, leaders and entrepreneurs must understand their unique selling point (USP). Elon Musk who just leapfrogged Jeff Bezos in Forbes’ richest people, understands this all too well. He’s not afraid to ruffle fears with his tweets. The demonstration of his new truck went horribly wrong and yet people signed up for it by the thousands.

3. Leaders must listen and learn

Cobra Kai is all about Johnny; a guy who fell on hard times who is able to redeem himself through Karate. Nothing seemed to be going his way and then, as fate would have it, Miguel comes into his life. It’s like the saying goes “when the student is ready, the teacher will appear,” or in this case, Sensei. Johnny learns a valuable lesson that forces him to adjust the motto of Cobra Kai’s dojo, founded by his Sensei, aka Kreese. While Kreese eventually takes back control of Cobra Kai, Johnny realizes that the mistake of Kreese’s teachings was the last part of the dojo’s motto, “show no mercy,” and eventually teaches his students to show mercy.

When Cees ‘t Hart was appointed CEO of Carlsberg Group, he was given a special access card that locked out all other floors for the elevator, allowing him to go directly to his corner office on the 20th floor where he enjoyed a stunning view of Copenhagen. After two months, he decided to move himself to an empty desk on floor downstairs with an open-plan floor. When asked why, he replied, “If I don’t meet people, I won’t get to know what they think. And if I don’t have a pulse of the organization, I can’t lead effectively.”

“The proof is in the pudding,” as they say. While Johnny’s methods are unorthodox in today’s politically correct snowflake environment, Cobra Kai’s students get results. They win. In season one, not only do they win the All-Valley Competition, but also in school altercations. Johnny provides his students with a quality service that shows up not just in wins, but a boost in confidence in their lives.

Back in the 90s, the computing world was dominated by Microsoft and Compaq. Apple was a small blip on the corporate radar. But Steve Jobs understood that people will pay a premium for quality. The quality and reliability of Apple products have propelled it to the world’s largest company.

5. Leaders must understand that teamwork is the key to their success

Andrew Carnegie once said, “Teamwork is the ability to work together toward a common vision. The ability to direct individual accomplishments toward organizational objectives. It is the fuel that allows common people to attain uncommon results.”

Ford had a huge challenge on their hands when they had to update their automotive icon – the F-150 pickup truck. The 1000-member team ran into all sorts of unique problems, such as the world’s supply of high-strength, auto-grade aluminum couldn’t cover the volume they needed for the F-150. According to Pete Reyes, the chief engineer on the project, Ford “had to build that supply.” But when the lighter, revamped F-150 hit the market in 2014, it was a resounding success, helping Ford increase their earnings from 2013 by $1.1 billion.

6. Leaders must understand the work-life balance

While Johnny is all in with Cobra Kai, he’s divorced and has an almost nonexistent relationship with his son. Daniel, on the other hand, has a successful business and has a successful marriage, and a good relationship with his children. However, when Daniel decides to open his own dojo to counter the bad influence Johnny is having on kids, he must learn to balance his work, Karate and his family.

Covid-19 made the work-from-home model a necessity. What some companies are learning is that it’s a win-win situation for their employees and for their bottom-line. Removing the on-average 53-minute commute time means about two more hours for employees to spend with their families or doing what they enjoy. Productivity, at least for the more tenured employees, has increased, proving the importance of a better work-life balance.

In places like Japan, where men were often asked to work long hours away from their family, suddenly found themselves at home. That has, in many cases, helped reduce stress and improve their relationships with their children.

7. Leaders need to understand that the key to improvement is consistent effort

In my twenties, I once had lunch with two guys, one with a fourth-degree black belt in Aikido, the other, with a third-degree black belt in Karate and asked them what martial art is most effective. Funnily enough, they both answered the same thing – boxing. Their reasoning was because you can learn it quickly and it will allow you to defend yourself in most situations. They explained that Karate and Aikido take years before they are of any real use in real-life situations. Ironically, 10 years after that conversation my son and I took up Karate eventually both of us earning black belts at the age of 10 and 42 respectively. Three years after starting Karate, we also decided to take Aikido where my son just earned his black belt at age 12.

Improvement doesn’t happen overnight, but over time, consistent effort guarantees improvement. Continue something long enough and we can tap into the power of compounding moving from a linear improvement to a parabolic improvement.

How To Reduce Stress

They find a speakeasy whose entrance was a fake refrigerator, authorities shut it down