Netflix costume drama Bridgerton smashed viewing records and projections when it debuted in December, quickly becoming the streaming service’s most popular original series ever. The first Shonda Rhimes project to come out of her $100 million deal with Netflix, Bridgerton explores the dynamics of courting and marriage in 19th-century England.

Bridgerton’s Christmas Day release was timed perfectly for Netflix viewers who needed an escape — and perhaps something to occupy their time as they spent the holidays alone, or with a smaller group than usual. And what an escape it is: A light, frothy retreat from the real world into a place where an unwed couple walking alone in a garden is enough to set tongues wagging and lead to social downfall. The escapism wouldn’t be complete without Bridgerton’s opulent set designs and costumes: Designer Ellen Mirojnick and her team of 200 were tasked with creating more than 7,500 costumes in five months for the series’ eight episodes.

Netflix could have predicted that Bridgerton would be a hit, but few anticipated it would become a full-blown cultural phenomenon, capable of providing a much-needed boost to the fashion industry. Fashion and retail have been among the industries hardest hit by the coronavirus pandemic — after all, why get dressed up with nowhere to go?

But months of sitting at home have started to take their toll, and consumers are looking to spice up their sweatpants and slippers uniforms. So where are they looking for inspiration? To the shows that have captured their imaginations for the past 11 months, of course.

“[This year] saw an unimaginable increase in consumers spending more time indoors than ever before, and they consumed content at record-breaking rates as a result,” says Dave Murray, European managing directory of LTK and its parent company RewardStyle. “With physical retail spaces, pubs, restaurants, and the arts closed, event gatherings canceled, and office attendance minimized, consumers turned to online and streaming content as a primary source of inspiration. In the LTK shopping app, we have seen this mirrored in a dramatic increase in searches for topical trends including interiors and fashion, as well as search terms from TV shows such as Emily in Paris, Sex and the City and Bridgerton.”

The data LTK compiled shows certain search terms spike when a new show is trending. When Emily in Paris debuted in October, searches for houndstooth jackets, the main character’s signature look, increased by 2,900%. When The Queen’s Gambit was all anyone could talk about, searches for 60s style spiked. And when HBO Max announced a Sex and the City reboot was coming, searches for Carrie Bradshaw’s beloved Manolo Blahniks surged by 1,000%.

All this browsing isn’t just for fun, either. According to Google, when searches for Bridgerton were spiking in early January, they were happening in the Google Shopping tab — not the main Google Search tab. That indicates consumers were searching with the intent to actually buy, and both anecdotal and quantitative data from fashion brands supports that.

Take luxury lingerie brand Fleur du Mal for example: In one of its first scenes, Bridgerton features a character being laced into a corset. Starting in December when the show launched, Fleur du Mal saw a 102% increase in people viewing corsets and bra tops on its site, and those searches led to a 30% increase in corset sales starting in December, with multiple items selling out.

“While many brands saw an uptick in casual styles this year, we were excited to see increased interest in our sexier offerings even before the show was released,” says Fleur du Mal founder and CEO Jennifer Zuccarini. “The success of Bridgerton definitely added momentum, and I think had people fantasizing, in more ways than one, about dressing up and undressing. Our whole team was watching the show, and we often discussed it in our morning marketing calls, so we were following it pretty closely.”

For Afshan Abbas, founder of Seattle-based Fuchsia Shoes, a surprising post-holiday spike in traffic to the site caused her to dig deeper into how people were finding her company’s hand-embroidered flats. “While most of our organic traffic comes from search terms around ethical, sustainable, made-to-order, juttis, or artisan-made shoes, Google Analytics revealed many of our new searches were coming from search terms around embroidered shoes,” she says. “I’d already heard of the show, but I didn’t put two and two together until I noticed a thread about Bridgerton and embroidery in our private Facebook group of core Fuchsia fans.” 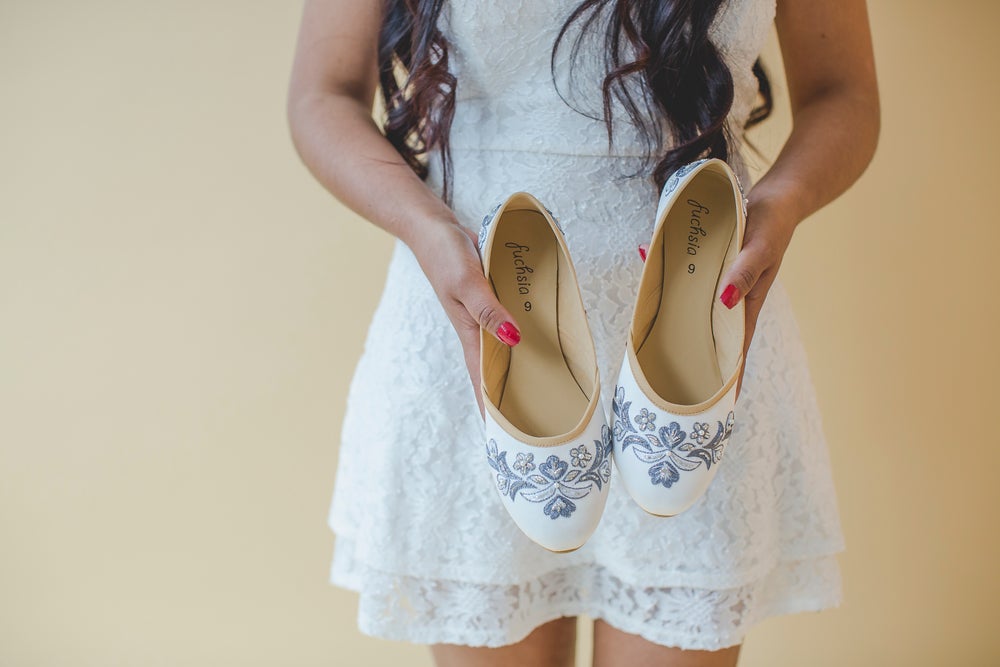 Fuchsia’s shoes do bear a striking resemblance to the embroidered and beaded clothing Bridgerton heroine Daphne Bridgerton wears throughout the first season, so much so that Abbas decided to produce a limited-edition Bridgerton-inspired pair to build on the momentum.

“We partner with incredibly talented artisans in Pakistan who use centuries-old techniques to hand-embroider every Fuchsia shoe,” she says. “Every pair of our shoes is made-to-order, so this gives us the flexibility to produce limited quantity batches of shoes and test new designs, textiles and patterns. After studying Bridgerton‘s incredible outfits, we decided to release a shoe inspired by some of Daphne Bridgerton’s dresses. We’re working with our designers to nail down the exact pattern, textiles and colors, but right now we’re looking at a shoe that will have elements of our Crown and Mohagny. It will be ornate, light blue and embellished with pearls and metallic beads. We’ll be releasing this new shoe in about three weeks.”

For other brands, the Bridgerton craze and accompanying surge in sales was simply a matter of being in the right place at the right time. Hill House Home, a direct-to-consumer home and fashion brand, debuted its line of “nap dresses” in 2019, and they were already wildly popular pre-pandemic. But in an era of Zoom meetings, the polished-yet-comfortable design became the unofficial WFH uniform for a certain group of mostly millennial women. “It’s a dress that you feel really presentable in, and that you can tackle anything in, but that’s still comfortable,” says Hill House Home founder and CEO Nell Diamond. “The nap dress name is a bit of a misnomer. Nobody’s napping — certainly not our customers. I have not had time to nap in years. It’s the idea that the comfort that’s inherent to the nap dress makes it possible for you to theoretically take a nap anytime.” 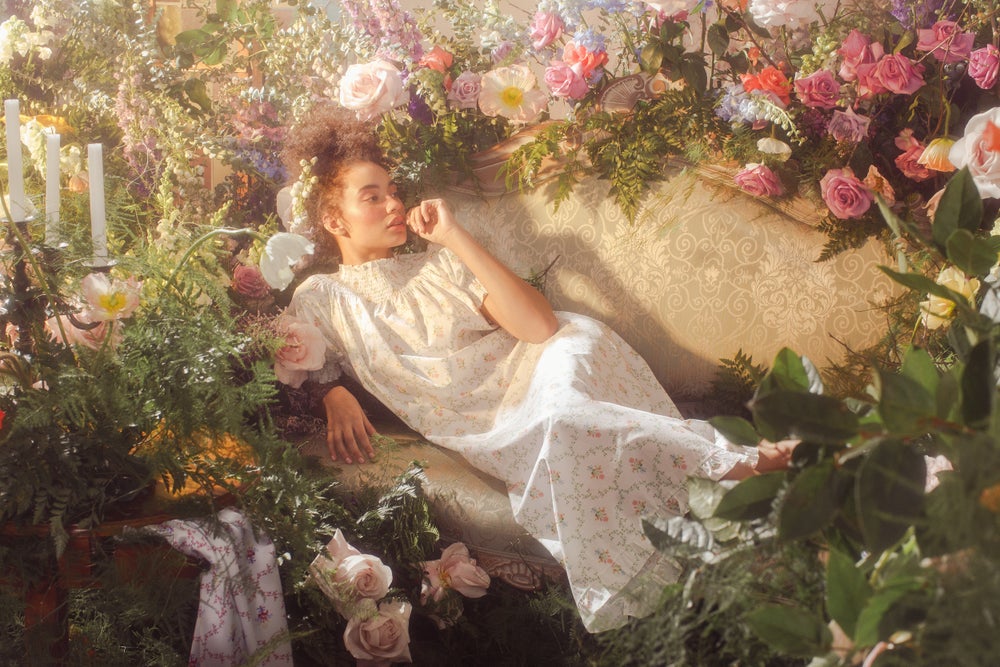 An October Wall Street Journal article compared the dresses to the costumes from the 1996 film adaptation of Jane Austen’s Emma. That comparison was remarkably prescient: Bridgerton is set in the same era, and searches for nap dress style inspiration on the LTK app in January jumped a whopping 25,000%.

“Where I really saw the Bridgerton effect was on social media,” Diamond says. “I saw people at home fully doing a dress-up with our product, and that made me so happy. We have this one dress called the Caroline, and it has a high neck and is very Bridgerton. We saw people wearing a headband and the Caroline with a cup of tea in front of their TV just having a night. And I’m like ‘Yes, you deserve it. What a year. Do that.’”

In a stroke of fate, Hill House’s new line of nap dresses, dubbed the English Garden Collection, debuts today. “We definitely love a good floral and proper Regency vibe, but it’s a happy accident,” Diamond says. “I’m not in with Netflix — would love to be, that’d be great.”

Challenge 2021: How to improve the physical and mental well-being of my employees?

The 7 Best Tools to Digitally Transform Your Business in 2021