Drew Barrymore isn’t sure she belongs in this magazine.

“Entrepreneur is a word I aspire to, but it’s not how I feel,” she says. “It sounds like someone who’s got their shit together. If this magazine was called Human Foibles, I’d be perfect. Which is to say: If anyone else out there is struggling to get it all done, I relate.”

But she also can offer a simple coping mechanism, a habit she formed recently that’s helped keep her focused through a year of reinvention. Instead of obsessing over what she hasn’t gotten to, she lists out everything she has accomplished. “We don’t often take inventory of what we’ve done — it’s very much a to-do-list kind of world,” she says. “But once in a while, make an ‘I’ve done this’ list.”

The exercise has given her moments of feeling a little less frantic and a little less desperate — however fleeting those moments may be. Barrymore juggles the intersecting worlds of entertainment and lifestyle products, and the events of 2020 have left her teams to grow a consumer-products brand at a time when shoppers aren’t shopping, and manage a daily talk show that can’t have a live audience.

Barrymore’s hesitation to call any of this entrepreneurship is actually not uncommon among, well, entrepreneurs. Responsibilities increase as free time decreases. The pressure to do more with less mounts. The title of “entrepreneur” can feel like a distant goal — something to claim when everything else is in balance.

But entrepreneurship is inherently messy. Holding yourself to someone else’s standard is never a recipe for success. “I feel slightly patronized by people who tell me to balance it all,” Barrymore says. “Those people who meditate and drink so much water; I’m like, Fuck you! My life is harebrained and inconsistent and erratic, and I will never be the kind of person who tells other people that I’ve got it figured out. I’m in the club of people who, at best, can find humor in the messiness.”

Barrymore’s career, of course, began in full public view. She was 7 years old in 1982 when E.T. The Extra-Terrestrial launched her acting career. Director Steven Spielberg (who is also her god­father) told her something that continues to guide her today: “Don’t sell out.” “It affected my whole life,” Barrymore says. “He told me to have a vision, and to not say yes to everything.” In other words, don’t compromise what matters. Create work you believe in. 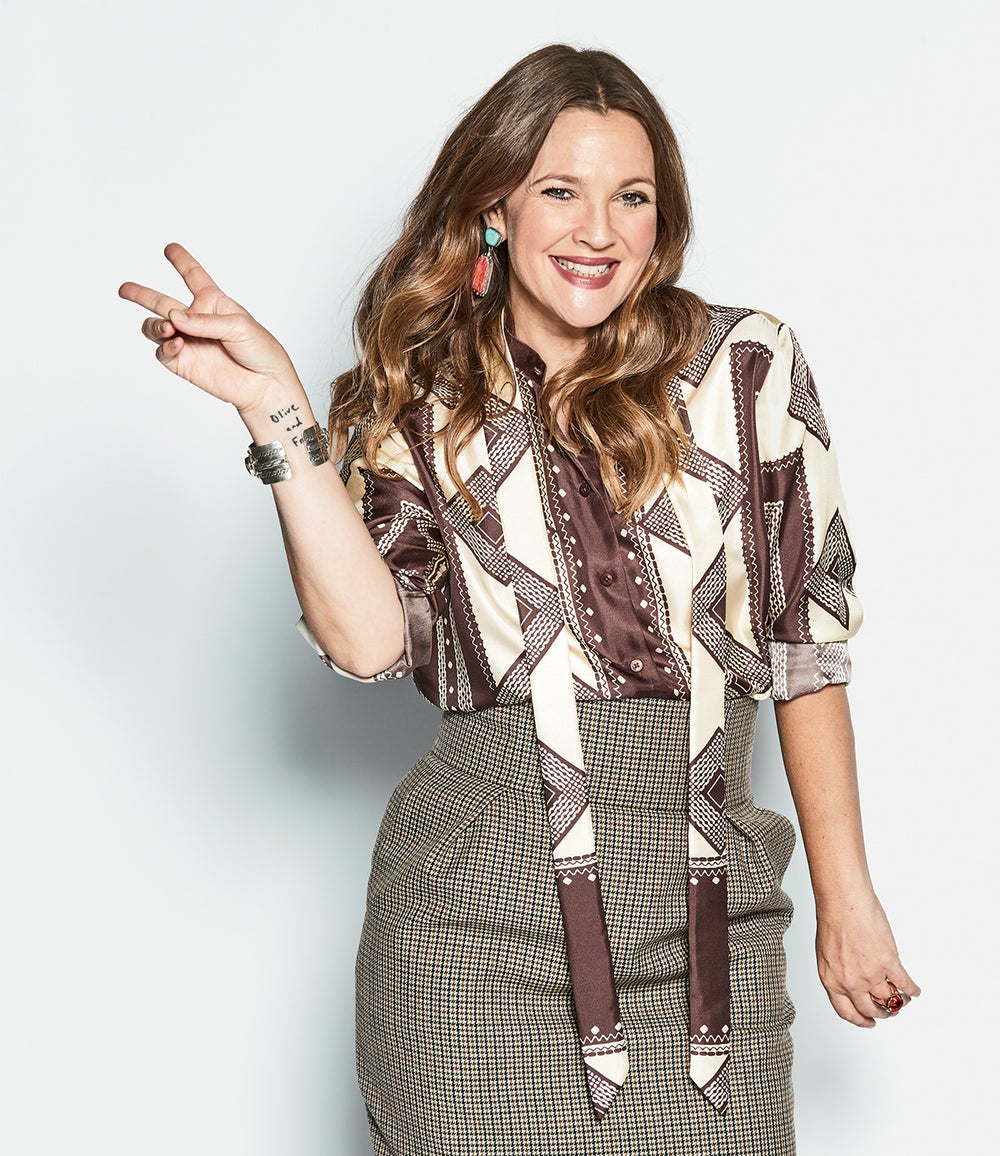 As Barrymore built an award-winning acting career and earned status as one of America’s sweethearts, she expanded her professional world and became a producer and product developer. All the while, Spielberg’s words helped form a filter for how best to spend her time. When you know what matters most to you, decisions become easier to make and infrastructure becomes more necessary to build. “There isn’t a ton of space, and I know when I’m slacking at work to make time for family, or slacking at family to make time for work,” says the mother of two young girls. “But time getting tight doesn’t mean you can do less. You have to get more clever, more inexhaustible, and push yourself more.”

That helped guide her when she first entered the business world in 1995. Kindness became the thing she wouldn’t compromise on: Anyone she worked with needed to have it in spades. She launched a production company called Flower Films with close friend Nancy Juvonen, and two of their early hires jelled so well that they now serve as co-presidents more than 20 years later. (One even does double duty as president of Barrymore’s lifestyle brand.) She credits that chemistry with Flower Films’ successes, which include Never Been Kissed, Charlie’s Angels, and 50 First Dates, among many others.

Related: 4 Tips for Discovering a Great Business Idea During the Pandemic

“You’re never just one person in a business,” Barrymore says. “You alone don’t do shit. You with a great team of people can accomplish so much more. Good business is choosing the right partners.”

The right partners can help you grow — and also help you know when to call it a day. Barrymore has done both. After serving as the face of CoverGirl for six years (as well as co-creative director on her campaigns, thanks to Spielberg’s echoing words), she was approached by beauty brand incubator Maesa about developing her own line of products. It struck Barrymore as an opportunity to own a part of a space she’d come to love. She spent time getting to know the people behind Maesa and retail partner Walmart and felt they had “really good intentions of trying to do something different.” In 2013, Flower Beauty launched as a collection of affordable, elegant, cruelty-free makeup products that have won more than 30 industry awards. It was the first focus of a multi-­category business that now includes eyewear, furniture, and hairstyling tools, all underneath the Flower brand umbrella. This spring, Barrymore will launch a new line of small kitchen appliances.

Not everything Barrymore touches has worked as she’d hoped. In 2017, a capsule clothing collection called Dear Drew for Amazon was well-received but demanded more than Barrymore had to give. Clothing, she says, was just too difficult a category — and trying to succeed there would happen at the expense of everything else. “I’m proud of what we made, but we ultimately moved on,” she says. “Don’t fester. Every single thing that doesn’t work out just means you learned something that can be applied elsewhere.”

Soon she’d face another learning opportunity — one that would push her in ways she didn’t expect.

In 2019, Barrymore signed on with CBS Television to create a daytime TV show called The Drew Barrymore Show, to launch in 2020. She had one goal: Avoid daytime-TV tropes. “Late-night shows put you to bed with laughs, but I want to start the day that way,” she says. “Let’s kick-start the life.”

Related: Lessons Learned from Launching a Skincare Brand in a Pandemic

As production planning got underway, the world came to a halt because of COVID-19, and her team had to build a new show on the fly. Rather than having a studio audience, a virtual collection of live viewers, cozy in their homes, would be displayed on a video gallery wall. In-person guests would be distanced from Barrymore, or, in the case of her Charlie’s Angels costar Cameron Diaz, beamed in via hologram. And Barrymore would have to carry an hour-long broadcast, in a made-for-live-audience format, without the energy of other humans.

“It’s a lucky thing I’ve spent the past seven years just chatting away on Instagram,” says Barrymore, who has nearly 14 million followers on the platform. “The silence in the studio is deafening. If our crew didn’t make a cacophony every once in a while, I’d just be dying.” 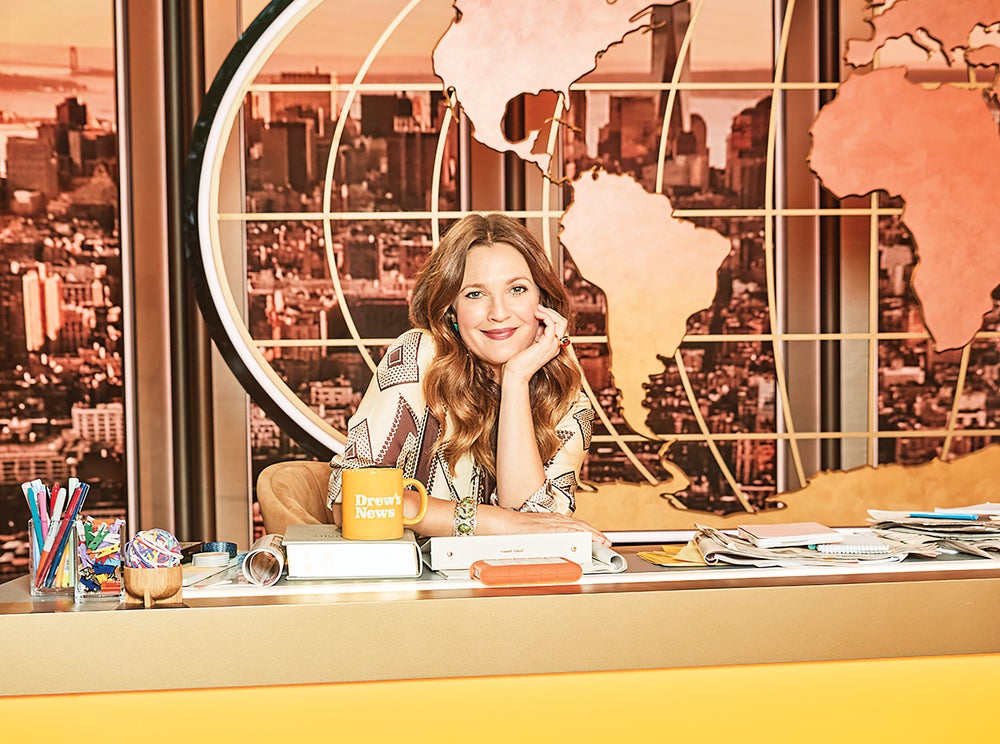 To rise to the occasion, Barrymore has fallen back on that habit of hers — appreciating what she’s got, rather than what she doesn’t. Is her show a greater challenge than she expected? Yes. But the pandemic created an environment that demands innovation, giving her the space to create the silly, joyful, comic show she’d originally envisioned. Viewers tune in to see Barrymore enthusiastically chat with her VFF (virtual friends and family) or, on a segment called Drew’s News, riff on headlines ranging from the creation of a wine-dispensing backpack to 7-Eleven’s launch of a new collection of sandwich cookies. It all matches the weirdness of the moment we’re living in. (A recent Saturday Night Live parody of the show depicted Barrymore as an over-supportive, over-­emotional, slightly deranged host and boss. She loved it.)

“Pre-pandemic, no matter how hard I fought, the show would have ended up following a typical daytime path,” she says. “So I appreciate the fact that I’ve had to launch with very little live feedback. I’m not being given a false sense of security that everything is funny and cute, and that’s making the show better and cooler and different.”

To keep up with the new demands, Barrymore had to adjust her life. She gets up earlier in the morning than she did before, exercises as a way to mentally prepare for the day, and then, as she puts it, goes out to “meet the tsunami.”

Related: 5 Inspiring Lessons from the Life of Oprah Winfrey

But she knows a tsunami can never be fully tamed. She can’t always be on. It’s something she says she didn’t understand as a young actress. But she’s learned, like so many business owners, that doing more doesn’t necessarily mean accomplishing more.

“Batteries have to be recharged, and I am fanatical about that,” she says. “As a parent, I don’t feel guilty saying my phone is off for the rest of the day to be with family. I don’t feel guilty ordering takeout food and watching TV. It’s not intellectual, it’s not physical, and it’s just what I need sometimes.”

As the world steps into 2021 with feelings ranging from dread to optimism and actual hope, Barrymore is focused on making the best of right now. She is keeping her own batteries charged and working to keep her family, team, audience, and customers happy.

“I do feel like I’m on a hamster wheel that’s on fire,” she admits. “But maybe being an ‘entrepreneur’ really just means that you’re someone who keeps running.”

Why You Should Break Through Your Boundaries