The CEO of Tesla and SpaceX mentioned Tuesday through a tweet that he contacted Tim Cook to discuss the possibility of the large company in Cupertino acquiring the electric vehicle company for a tenth of its current value, without However, he did not accept the meeting.

The great tycoon revealed through Twitter that years ago, during one of the worst moments of the company, he tried to sell Tesla to Apple for a tenth of its current value, but Tim Cook did not accept the meeting.

This Tuesday, Musk showed surprise about the information published in the last hours about Apple’s supposed project of the production of electric cars and the basis of a new type of ‘radical’ battery design that would reduce costs and extend the reach of the automobiles.

The founder and CEO of Tesla, Elon Musk, accepted that “in the darkest days of the Model 3 program I contacted Tim Cook – Apple’s CEO – to discuss the possibility of Apple buying Tesla for a tenth of our value current. He refused to accept the meeting ”, mentions the businessman through his Twitter account. 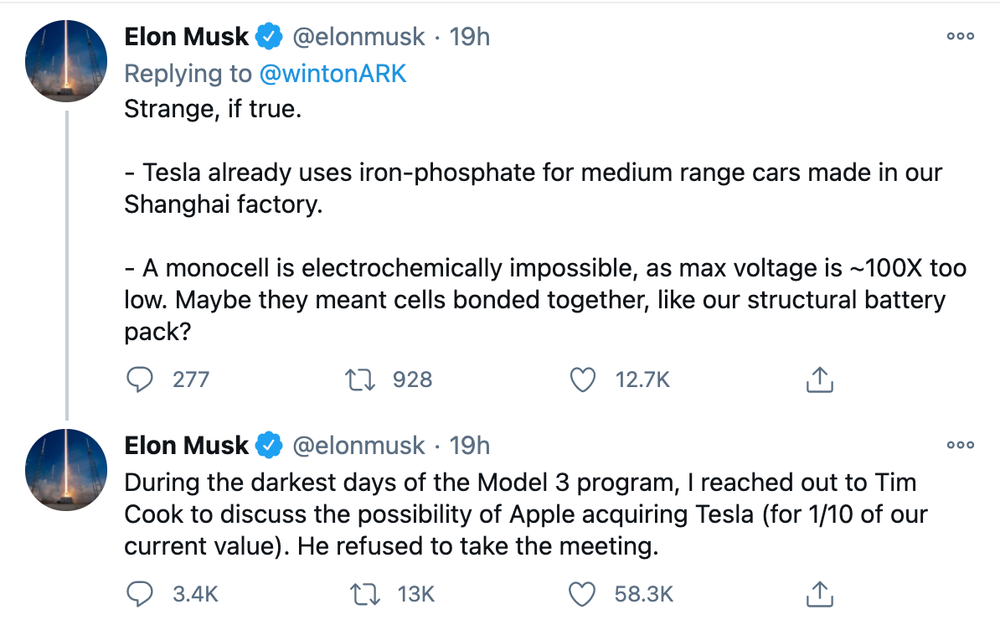 That said, the idea remained at that, since Cook did not even want to take the meeting, despite the fact that in 2013 Apple was interested in the acquisition of Tesla. Around that time, Cupertino was fully involved in the Titan project in order to develop an electric car by then, according to reports.

At the time, Tesla’s market value was about $ 60 billion, one-tenth of its current value.

To know more: This is the new track of the vehicle that Apple would be building

According to the US media, the battery that Apple would use is a ‘single cell’ design that would allow the greater introduction of ‘active material’ and made with lithium-ferrophosphate since it has less tendency to overheat, an element that makes it more safe.

“Maybe they meant that cells are attached to one another, like our structural battery pack?” The businessman wondered.

However, Musk pointed out that Tesla “is already using ferrophosphate for medium-range vehicles made at its Shanghai factory” and that “a molecule is electrochemically impossible, since the maximum voltage is approximately 100 times too low.”

Apple’s ‘ Project Titan ‘ is announced just as Tesla shares are at all-time highs. This Tuesday they closed with 640.3 dollars per share, which has allowed them to become the car company with the highest value in the market.

Real Risk vs. Perceived Risk: 2 Factors to Grow Your Business in 2020