They say that love enters through the stomach and so does business. This is what happened to Hugo Magaña, Jorge Navarro and Arturo Martín del Campo, three friends who used to go out to eat wings and “chat with friends.” They liked the concept so much that they decided to create one with its own rules and flavors: Santas Alitas, a franchise that now has 70 units, 21 that opened in the middle of the pandemic.

It was the year 2011 when the idea of one day having his own business began to haunt Hugo’s head. He was then 23 years old and worked in a BTL advertising agency. The young man decided to go after his dreams and with the savings he had and a family loan, he set up a business to sell wings in Colonia Jardines de la Cruz, in Guadalajara.

“I had a low budget, but from day one the business was a success because it was a unique place that was very popular. At that time the concept was not so exploited and a lot of people went every week ”, he recalls.

After two years of operating that business, Hugo decided it was time to leave the agency and get fully into his business. “It was not profitable at all because we were unaware of the operation and administration, but from the moment I fully entered the profits began to be seen,” he says.

Then Arturo, his cousin, joined, who started working in the bar and after even working as a garrotero, he came to the management. Soon after, they agreed to establish a partnership and push the business to grow under the franchise model. “It was easier because we knew the operation,” they recall.

It was when the entrepreneurs found an opportunity to transfer a bar and decide to turn it into Santas Alitas and the brand began to franchise. The expansion first took place in Guadalajara, an area they knew well.

Then the people who wanted to buy a unit began to arrive.

The first unit outside of Jalisco was in Aguascalientes, but young people say that the true turning point was the franchise expo, in 2019, when they managed to expand nationally.

It was when Jorge, who today is the operating director or COO, joined the company. “Many friends approached Hugo and I asked him; we already knew each other when we were studying at university. I was franchise number four and once I saw the success and projection I fell in love with it, ”he recalls.

It was shortly before the 2019 Franchise Fair that they really started to develop formal operating manuals, have more established areas, and have everything well organized. “Organic growth through trial and error and helped us polish operating manuals. We did everything and then last year the firm of Gallástegui Armella Franquicias supported us and now the consultant Jorge Valencia.

Santas Alitas was recognized in 2020 with third place in the 2019 Food and Beverage category of the AMF National Franchise Award. Arturo comments that one of the main factors in making sales has been the brand. “When you look at all the competition, they try to emulate a concept from the United States and we wanted to take that example and make it Mexican.”

In this way, Santas Alitas does not sell wings, but wings and the place is decorated with elements that give it a touch of Mexican mischief: wrestlers, masks, among others.

The franchise targets an NSE D + market segment in which they found that there was no differentiated and quality offer. And the consumer response has been positive. Today the chain has 70 stores, 21 of which were opened in the last year.

The investment for a restaurant bar is 1.5 million pesos, but Hugo explains, it is an investment far below others when you think of a similar restaurant. The return on investment occurs in approximately 18 months.

They also have a model focused on the food curt areas and gourmet markets in which alcoholic beverages are not sold and consumption is practically to go. 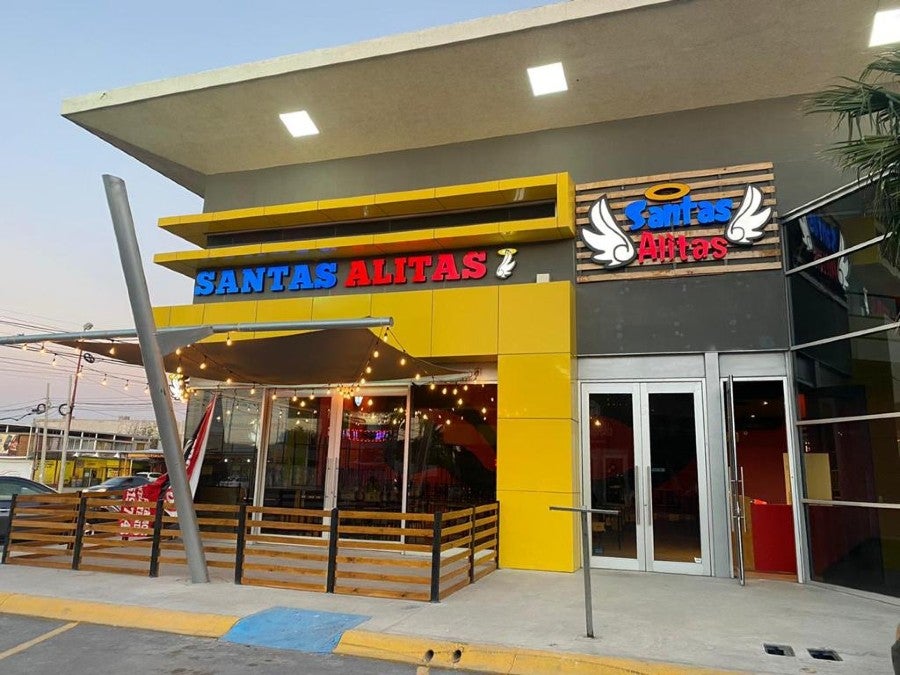 Respond to the pandemic

This business, like many others, was affected by the pandemic, which caused them to have a decrease in their sales between 20 and 30% given the restrictions on social distancing or the closure of restaurants to prevent the spread of the coronavirus.

So it was necessary to make adjustments to the business model. “It was quite a strong blow because they closed us on different and repeated occasions, they limited us hours, but we did not want to see it as a limitation but rather as an opportunity to explore new sales channels,” says Arturo.

So they took hold of the home ordering platforms, FB Messenger and launched a third franchise model based on the dark kitchen, kitchens that only serve for cooking, but not as a restaurant. “We had a lot of growth and opportunity to improve home service,” they say. “Sales decreased, but have remained stable, the business continues to be profitable and we have limited the number of closings to less than 5%. We closed our two branches to reinforce the corporate part and focus resources on reinforcing the rest of the chain, ”says Arturo.

For those who were already operating a Santas Alitas unit, the franchisors gave them a discount on the royalty payment of up to 70%, in order to continue supporting operating expenses.

Advice was also given to negotiate with the landlords on the issue of rent. “There were some very empathetic and others who did not support, but put pressure on you to leave the premises and we have advised,” says Jorge.

During the pandemic, 21 openings were made and there are 15 more in process for this year.

“Betting on a franchise, regardless of the line or brand, is to be accompanied and advised by people with more experience in the business,” says Arturo. Recommends entrepreneurs not to stop investing. “You don’t have to be afraid of failing, with a franchise you will be accompanied by experts.”

The spaces left by the closings of the stores served to train franchisees and strengthen their delivery service.

With these actions, they achieved that the chain’s sales were not diminished. Franchisors say that most of their associates kept 60% of sales, thanks to working together.

The strong bet for this year is towards the dark kitchen. “It will be one of the expansion models and will give the possibility of having more than one brand in the same kitchen. In the end, this model does not have a counter, if you decide to take advantage of it to sell other brands, it does not generate conflict “

Regarding the fact that many may say that why pay a fee if under this model there is no counter, Arturo explains that it is not a physical counter, but a virtual one.

And it is that this sales channel allows you to offer all the wings on a single page or website. On the Santas Alitas platform there are more than 15 specialties of the dish, in addition to having other foods such as barbecue, hamburgers, nachos, munchers, drinks or French fries.

Orders are generated through the web platform and once the preferred order and store is chosen, a home delivery can be requested or the order collected directly at the branch at no cost.

For this year the focus will be on the growth of the mara. Arturo says, “we want 50 new branches and look to the Latin American market and the southern United States.”

The 7 Steps to Managing Your Ad Agency