Romance scammers are raking in the dough thanks to lonely singles stuck at home during the pandemic.

In 2020, the scams duped people into giving up $304 million, a 50% increase from the previous year, according to the US Federal Trade Commission. The number of reports the FTC received from romance scam victims also reached 32,792, up 30% year over year.

What didn’t change is how much the fraudsters generally extracted from unsuspecting victims. Individuals gave up a median of $2,500, which is in line with losses reported in 2018. 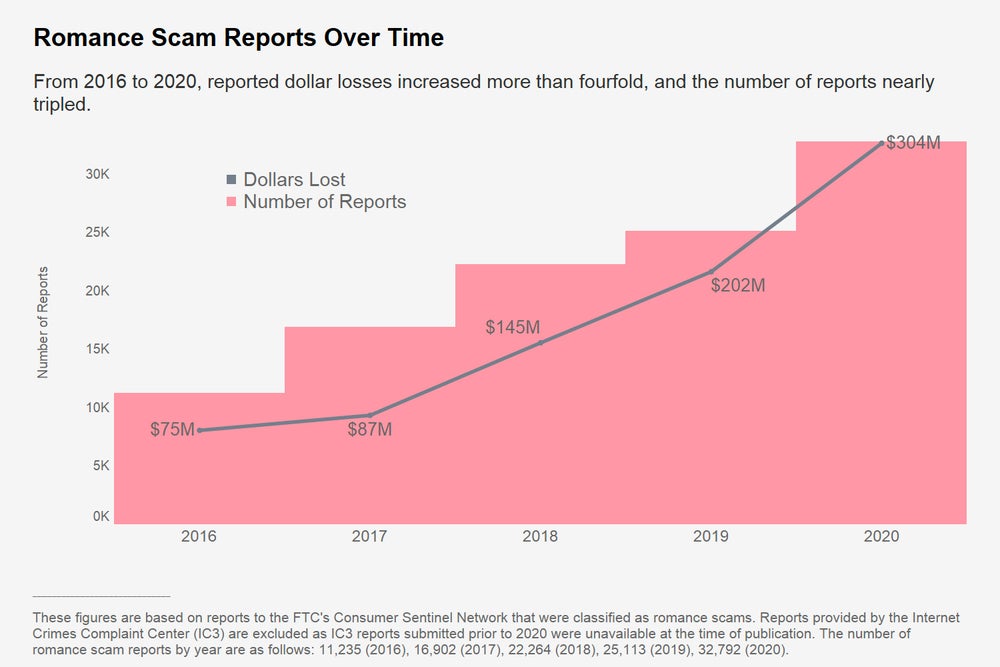 The scams usually involve a “too good to be true” profile on a dating app or a social media platform from someone who tries to schmooze their way into your heart. It will often be loaded with pictures of an attractive person. But in reality, it’s all a ruse to dupe you into sending money to the fake lover, usually via bank wire transfer or by purchasing digital gift cards.

A red flag for a romance scam is when the purported suitor comes up with reasons for why they can’t see you in person. Unfortunately, COVID-19 has only given the fraudsters seemingly legitimate excuses to avoid meeting up.

“The pandemic has both made that easier and inspired new twists to their stories, with many people reporting that their so-called suitor claimed to be unable to travel because of the pandemic,” the FTC said. “Some scammers have reportedly even canceled first date plans due to a supposed positive COVID-19 test.”

The pandemic has also given the scammers another reason to ask people for money. According to the FTC, some victims reported the fraudsters claimed they had a medical emergency due to COVID-19.

Interestingly, the romance scammers can also do the opposite and send the victims money. However, the FTC says the sent money is usually laundered stolen funds from another crime. “In fact, many reported that the money they received and forwarded on turned out to be stolen unemployment benefits,” the regulator added.

Victims aged 20 to 29 saw the biggest increase in romance scams. However, it was those over 70 who reported losing the most money, with the individual median losses at $9,475.

The FTC has a number of tips on how you can protect yourself from a romance scam. One noteworthy technique is to do a reverse image search on the photos of your suitors’ profile page. This can reveal whether their photos were lifted from another source.

Gain Visibility, Boost Your Career and Get Better Job Opportunities