When someone tells Kara Goldin why she can’t do something, she replies in the same way: “What can we do?” After all, something has to be possible! That attitude helped her turn her life around, and it led her to create the popular beverage brand Hint Water. As she writes in her new book, Undaunted: Overcoming Doubts and Doubters, the journey began after she left her job at AOL in 2001 and tried to improve her health. She struggled to kick a diet soda addiction, couldn’t find anything unsweetened in the marketplace that she liked, and set about building a lightly flavored, sugar-free water. Despite many manufacturing and retail challenges, she succeeded — and now, like in this conversation, she urges other entrepreneurs to approach their challenges “undaunted.”

In your book, you write about a hard conversation you had with your husband in Hint Water’s early days. You write, “We had no manufacturing partner. We were running out of inventory. We were burning through money. We had four kids at home, in a house in the most expensive city in the country. What the hell were we doing?” Many entrepreneurs ask themselves that question. What got you through it?

It’s easier to get through that moment when you start to hear from customers. They were writing me from day one, saying, “I’ve lost weight since I’ve started drinking your product. I’ve controlled my type 2 diabetes.” So whenever I faced a super challenging time, or decisions needed to be made about whether or not we were going to move forward, I thought, If we go away tomorrow, then there’s these people out there that actually really love the product. I would literally go back to these emails or remember the phone calls I had with these people.

Many other successful founders have told me similar things, but I’ve always wondered if customer feedback can be a trap. How can you know if you’re on the path toward winning millions of customers — or if you made something that just a few people will love?

Yeah. I view the entrepreneur’s journey as a little bit different: It’s about if you’re doing what we did — launching a new category —­ versus tackling an existing category. If you’re doing something totally different that the consumer needs to catch up to, then you may think, Well, I only have a thousand people or whatever — ­but this category isn’t even written yet! So how big could it ultimately be? I thought, How long did it take for diet soda to become a category?

Related: How Michael J. Fox Stays Optimistic Even When Times Are Tough

You know, I ran AOL’s e-commerce partnerships prior to launching Hint. I never heard from individual consumers about what I was doing there. Once I did with Hint, it was like a drug. I don’t think I could work on a B2B after this. Especially when you have challenging times, where you’re trying to raise money and getting lots of noes, or you can’t figure out how to distribute this product, you go back to this customer who is obsessed with what you’re doing. It’s just such a powerful thing.

Right, because you now feel a responsibility toward these people.

Yeah. And it has expanded. Now when people ask me, “What are you working on?,” I’m like — OK, well, I learned a lot about water over the past 15 years, and it’s not really as clean as we all thought, and I found out really by accident, but now I’ve got ownership of it. I thought, as a private-sector CEO, I need to go and do something about this. So in between launching a book and still running a company, I’ve now got this thing going [working on a clean water bill] with a few senators and members of the House of Representatives. 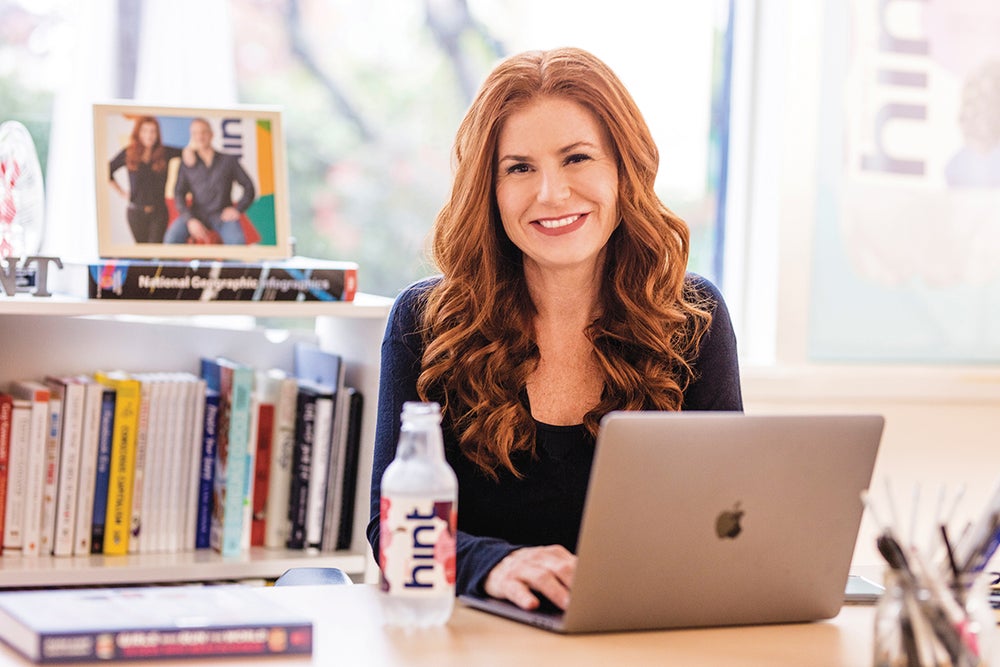 What’s that been like, trying to create change in this completely new area?

I realized that I could just pick up the phone and start to make a network. I’m not a lobbyist; I’m not a policy maker. But I was able to go in and talk to Democrats and Republicans and say, “Do you agree that we should all have clean water? Of course you do.” Once it actually gets to legislation, we’ll see whether or not that actually holds up.

Related: Why Mindset Matters for Success

A lot of people, especially in Congress, have said to me, “Where are the big soda companies in this conversation?” And I’m like, “Well, they can come.” I don’t know! I’m just kick-starting this. So often, people think they can’t go forward if they don’t have certain things in place. And the reality is, you actually can go forward. You can go pretty darn far, if you just go in and try to make stuff happen. Sometimes being the underdog — and not actually having a whole lot of weight behind you — works to your advantage.

I imagine Washington can be a hard place for entrepreneurs, because they’re so used to controlling what their company does. Now you’re at the mercy of all these other people and their agendas.

The key frustration is time. It takes a lot more time to get things done. I mean, it took me six months from when
I wrote Hint’s business plan to actually getting it on the shelf. I tell that story to people and they’re like, How? I don’t know! I just wrote it and figured it out. I don’t have a lot of patience.

Most people’s natural instinct is to follow somebody with lots of experience. So whether you’re an entrepreneur or somebody trying to do stuff in Washington, I think if you’re smart and you’re curious and relentless, then you can go figure a lot of stuff out. That’s the beauty of it.

I like what you said there. How do you suppose someone without experience transcends their instinct to be a follower, and instead becomes the person others want to follow?

No matter what industry you’re in, entrepreneurship is all about curiosity. It doesn’t end. It’s sort of like a puzzle.

Related: Discipline Is What Leads to Success

I didn’t go into the beverage industry thinking I was disrupting it. I mean, before I launched Hint, I wouldn’t have called myself “curious.” But I did come from the tech industry, where innovation is just part of the deal. It becomes the way your brain works. Then I saw the beverage industry, and it wasn’t like that. Someone would launch a product, and as long as consumers were buying it, then it was just fine. When people stop buying, then a company would come out with a new version. I often think that if I didn’t work in the tech industry before this, and I had just jumped into the beverage industry, I probably would have been incredibly dissatisfied.

In other words, to become a leader, put yourself in an environment where you have to think like one? I imagine that tech is a great place to learn that, because every tech company knows that change comes quickly — so they either constantly innovate or fall behind.

Totally. Look at all the companies over the years that have gone out of business. It’s because they worried about what innovation would do to their mother-­ship business. Kodak, Xerox — they learned this too late. So many industries can be disrupted just by crossing borders [into other kinds of business]. I really think that the tech industry holds the code for disruption, and for how we should be thinking about moving into other industries. It starts with curiosity. It starts with not having an ending point.

7 Secret Ways to Save Money Shopping on Amazon