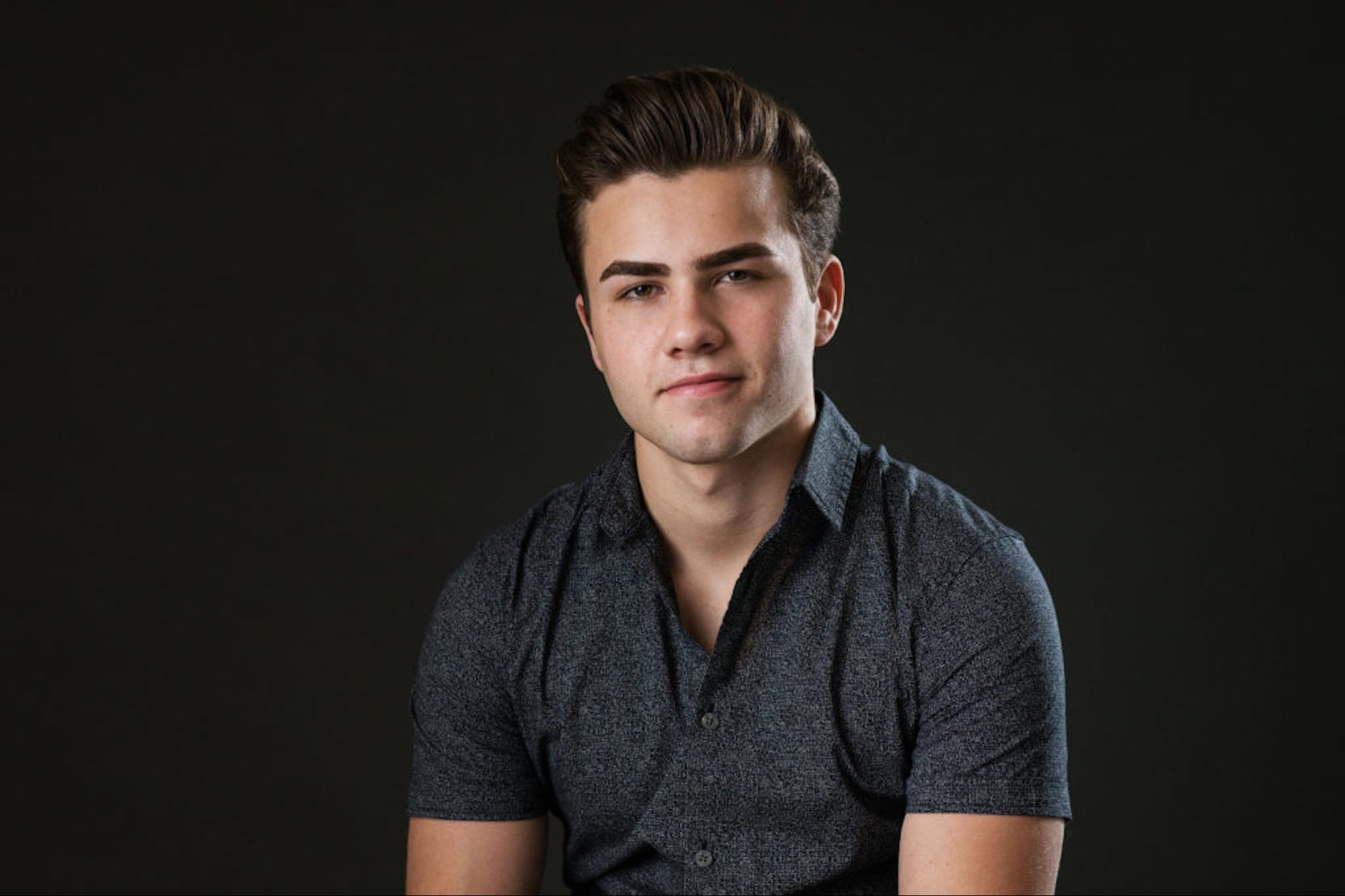 In this ongoing series, we are sharing advice, tips and insights from real entrepreneurs who are out there doing business battle on a daily basis. (Answers have been edited and condensed for clarity.)

Joey Ruben is an 18-year-old high school senior in the Chicago suburbs. While many kids his age have part-time jobs, Joey owns a social media consulting company called Joey Ruben Consulting that works with large corporations such as Fashion Nova and the sports media outpost Lines.com. Joey is also co-owner of Happiness Project, a company that raises awareness and money for mental health. This year, Happiness Project donated $50,000 to the National Alliance of Mental Illness (nami.org).

We caught up with Ruben to discuss his path to running his own company, working with top influencers including Addison Rae, Kendall Vertes, Tyler Cameron, Zedd and NLE Choppa, and to get his advice for any business looking to expand its social media footprint.

What does your company do for its clients?

Each time I get hired for a new consulting position, my role tends to change slightly based on the needs of each company at the time. For example, for the sports media company I am currently working with, I am in charge of claiming their desired handles across all social media platforms by working directly with brand representatives from various social media platforms. I am also in charge of building their audience on their website, as well as their TikTok and Instagram audience on their theme pages, such as @kickoffs and @real_nbamemes.

For companies such as Happiness Project, my main focuses are influencer marketing, content creation and handling social media services such as getting our desired handles on different platforms. In just over a month, we have gained more than 150,000 followers on our TikTok profile.

Related: He Built the Netflix for Music Creation

How did you get started in social media as a means of making money? What was the moment when you realized something you did for fun could generate revenue?

In 2016, when I was in 8th grade, a few of my friends and I each created our own meme accounts on Instagram as a joke to see who could gain the most followers. Within a few weeks, I had gained more thsn 10,000 followers and was starting to have some fun with it. About two months later, I had about 40,000 followers. I started to notice individuals were consistently direct messaging me to buy advertisements for various apps, clothing companies, music and other Instagram accounts. I started replying to a few direct messages and read a lot of information on the internet about how much to charge people for advertisements. I started charging approximately $30 per advertisement on my page. It was not a ridiculous amount of money, but for an 8th grader, it was really motivating. This opened my eyes to the endless financial opportunities on social media and drove me to want more.

Can you break down the model for making money with social media?

In 2018, after about 18 months of growing my account, I had now gained more than on e million followers on Instagram. After I hit one million followers, I started posting more ads for a larger amount of money. I was posting about two-to-three ads per week charging around $150-$300 per post. That may seem like a lot of money, but compared to what ad rates are now that the market is more established, those prices are on the very low end. Some meme pages on Instagram, such as @fuckjerry, can charge upwards of $50,000 per advertisement. There is no set algorithm for how much someone should charge for an advertisement. Rather, it ranges based on a variety of factors such as niche, engagement rate and follower size. Most people with an Instagram theme page that has 1,000,000-3,000,000 followers with an active following are making in the six-figure range each year if they are doing it right in today’s market.

What happened to your first social media business?

My first social media business was my Instagram meme account. Unfortunately in August of 2018, my page was hacked and I was never able to recover it.

How did that impact you financially and emotionally?

Losing my account definitely affected me financially, but the real toll it took on me was emotional. I went from having life exactly how I wanted it to be to essentially losing my job overnight. I felt like I had lost my identity and a part of myself. My grades went down a lot in school, and I lost my temper easily.

What lessons did you learn from that first setback?

I learned that without failure, it is impossible to succeed. After losing everything, I was starting to feel sorry for myself instead of realizing I had nothing to lose and trying to rebuild what had been taken from me.

Related: How a Personal Mess Became a Passionate Message for This Entrepreneur

How did you get yourself back in the game?

In 2019, about 10 months after losing my account and not knowing what to do next, I started to look at a new up-and-coming social media platform called TikTok. After a little bit of research, I learned that TikTok used to be an app called Musical.ly, which was bought out by a huge technology company called ByteDance that was pouring millions of dollars into advertising for their new app. I was instantly intrigued and downloaded the app. I started watching the videos on the “For You” page and realized that this could be my chance to get back in the game. I then started a TikTok meme page. At the time, very few people if any were creating TikTok meme pages because there was no money in it yet and the social media platform was not established like Instagram. I knew that everyone would come over from Instagram eventually when they saw the potential this app had, so I used that to my advantage as I got ahead early. I started posting different types of content over the next few months to figure out the algorithm learning what worked and what did not. Fast forward a little over a year, I now have more than 1,800,000 followers on the first page I created — @funny — as well as more than 700,000 on my second page, @gods. Additionally, I have five other pages between 100,000-400,000, like @viral, which has more than 300,000 followers.

Explain how big influencers go about monetizing their TikTok accounts.

One of the biggest ways huge influencers make money on TikTok is through record labels that will pay them to record themselves dancing to their songs. Record labels are pouring millions of dollars into TikTok advertising because the songs that are trending on TikTok tend to be the same songs at the top of the Billboard charts. This strategy works very well because as smaller influencers see bigger influencers dancing to these new songs, they start to do it as well. Since larger creators inspire smaller creators to mimic their posts, record labels do not have to pay the smaller creators that are following an existing trend and advertising their song in the process at no cost to the labels.

How have you used TikTok to generate revenue for yourself?

Even though TikTok has blown up over the past year, and is the fastest growing social media platform in history, ad rates are not as clear-cut as Instagram is now because the market is less established. I generally will post one-to-two advertisements per week that will typically bring in approximately $600-$800 per post on my 1.8 million-follower page. I could be making more off of TikTok, but I don’t want to oversaturate my large following and lose significant engagement because I am posting too many ads. I have many other jobs that generate far more revenue than TikTok, but I see TikTok as a long-term investment and currently plan on selling my pages in the future. I received an offer of $70,000 for my TikTok page, but turned the offer down. Currently, I am less involved with the day-to-day on my pages and have a hired team that runs all of my pages, allowing me to focus my attention on my other consulting jobs.

How many hours a day do you devote to managing social media accounts?

During March, when the whole world went into lockdown, I was averaging more than 12.5 hours of screen time per day. I knew that everyone was at home just as bored as I was and would be endlessly scrolling through their “For You” page on TikTok. I knew that if I wanted to get back to where I was before and beyond that I needed to capitalize on this opportunity and maximize my time spent growing my accounts. Later on, I read that internet usage across America was up 18% during March compared to the previous year. My initial observation about everyone being at home on their phones was correct and ended up paying off.

Related: Covid Sucks. Here’s What This Entrepreneur Is Doing to Make Schools Safe.

Now that I have built my accounts to a point where I no longer need to put forth all of my effort into their daily maintenance and growth, I have my team posting on the accounts for me. My team is run by Jack Ziebka, who handles the day-to-day operations of posting on my accounts. Jack is a friend from my high school who I have known since grade school and has proven to be trustworthy, hard-working and incredibly reliable. People say working with friends never works, but as my good friend Chucky Appleby once told me, “Working with friends is fine, as long as they are qualified.”

Are you seeking clients or do they seek you?

In the past, I used to seek out clients, but because of the jobs I am currently working, I am not actively looking for new clients at the moment.

What are two key pieces of advice you would give to someone trying to make it in the social media industry?

1. Research can only get you so far. Making mistakes, as well as trial and error, is where real knowledge comes from. I have failed hundreds of times, and every single failure has taught me something of value.

2. Do not be scared to leave money on the table in the short term if it can lead to long-term gains. In the past, several companies, such as Fashion Nova, have offered me a one-job contract for a significant amount of money. But instead, I offered to work the first month for free, allowing me to prove my worth before signing a long-term contract.

How to Have Meaningful End-of-Year Vendor Meetings - Virtually

10 Tips to Get into Undergraduate Business Programs