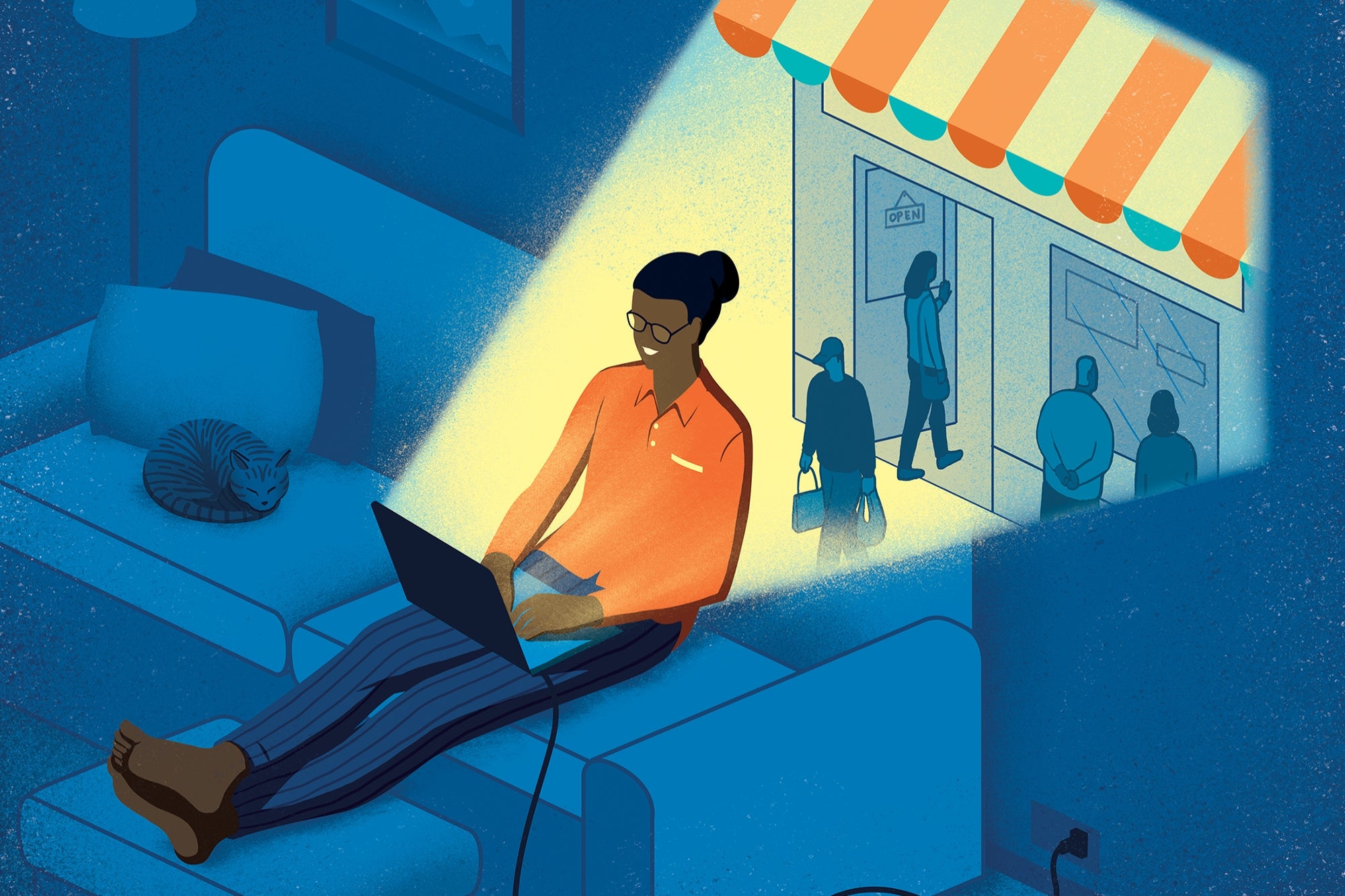 Jeff Yoder had been a creature of many offices. He spent two decades as a federal government contractor, but a tough 2019 prompted him to reevaluate his job. He wanted more freedom and started shopping for a franchise to buy — and eventually zeroed in on ShelfGenie, a brand that installs versatile shelving in people’s homes. He liked many things about it, including that most ShelfGenie franchisees operate out of their own homes. In other words, no more office.

“That was huge to me,” says Yoder, who is based in Alexandria, Va. “I’m comforted by not having the overhead of thousands of dollars a month in rent as I’m starting a business.”

His timing couldn’t have been better. Yoder opened his new business in April, just as the pandemic was taking hold. As lockdowns started to feel semipermanent, he discovered that a great new synergy was forming in communities across the country: Work-from-home clients began hiring work-from-home franchises to provide work…at their homes.

Related: 10 Low-Cost Franchises You Can Start From Home Right Now

“Consumer behavior has shifted — ­perhaps permanently,” says John Carter, cofounder of Vonigo, a cloud-based business management platform for franchises. “Spending that used to go to such things as restaurants and travel is now being redirected to companies delivering services to the home.” That shift, he says, is driving a big uptick both in consumer demand for home-based services and in interest from entrepreneurs who want to join a work-from-home franchise.

A brand like ShelfGenie felt it almost immediately. “People who lived with frustrations about their homes when they were never there are now very willing to spend the money to make them more functional,” says Andy Pittman, Shelf­Genie’s president. Over the past six months, a growing cohort of work-from-home customers have fueled about a 33 percent system-wide sales spike. Yoder himself has benefited; he is five months and 30 customers into his new career, and many people call him to install shelving and storage in their new home offices.

But as 2020 has turned into 2021 and an end to the pandemic draws (hopefully) nearer, work-from-home franchises are pondering a question: What does life look like when offices open back up?

Nobody needed a pandemic to realize the benefits of working from home. Between 2000 and 2019, the number of people working exclusively from home jumped from 3.3 to 5.7 percent, according to the U.S. Census. A third of Americans worked remotely at least part of the time, according to the Bureau of Labor Statistics.

The franchise industry has been along for the ride, too. For years, many franchises have touted their home-based models — attracting home renovators, travel agents, exterminators, junk removal experts, and other service providers who were happy to be based out of their own homes. Why pay for an expensive storefront on Main Street when you can save that money and spend it on digital marketing instead?

So when COVID-19 came along, it didn’t exactly introduce the idea of working from home — but it did force millions of new people to try it out. The verdict: thumbs up. In a recent FlexJobs survey of more than 4,000 people working remotely during the pandemic, 65 percent reported that they’d like to work from home permanently. Mark Zuckerberg made news in saying that as many as half of Facebook employees could be remote within the next five to 10 years, and 74 percent of companies across the country plan to do the same, according to a Gartner survey of more than 300 CFOs.

All of this has made work-from-home franchises newly appealing, and easier than ever to operate. Anybody with wi-fi is now accustomed to Zoom calls, digital contracts, and e-payment platforms, and parents juggling daycare duties find it particularly useful to work from a home office. Plus, the economic uncertainty from the pandemic will likely keep many entrepreneurs skittish about real estate for a while.

“Broadly speaking, home-based franchises are very attractive because they provide the lowest cost of entry,” says Edith Wiseman, president of Frandata, an industry market research firm in Arlington, Va. “They don’t require inventory or ongoing overhead, so allow for incremental scaling that is particularly appealing to people who want to enter with lower risk.”

There’s another factor driving entrepreneurs into home-based franchises: the economy.

Franchise interest tends to spike during periods of high unemployment, and that’s true now, says Jeff Johnson, founder of the Franchise Research Institute. “We’re seeing a bunch of middle-­management folks who have been furloughed and have a bit of cash, and they want more control over their work and financial lives,” he says. In addition to the low overhead and startup costs, he points to quick ROI as a major appeal of home-based franchising. “People want a fast return they can put their arms around,” he says.

Related: Is Working from Home Here to Stay?

Brian Scudamore, founder and CEO of O2E Brands, which franchises 1-800-Got-Junk?, Shack Shine, and Wow 1 Day Painting, has seen the shift. His franchise inquiries have surged since summer — and not just from the unemployed. “People feel it’s riskier staying employed than making the leap and starting a new business,” he says.

As the trend gains traction, huge swaths of Americans find themselves ready to invest in a back-pocket dream of running their own business — and to do it with the lowest risk possible.

But of course, we won’t all be stuck at home forever. So what happens next for these home-based franchises? Some potential answers can be found today.

Tenin Terrell is a good case study. She began franchising her creative-­education brand, Fashion Works, in 2018. For an initial fee of $5,000, franchisees receive the tools and education to lead sewing and cosmetic chemistry classes so they can teach science to kids by making soap, body butter, and perfume.

But although Terrell’s franchisees were based at home, they weren’t teaching at home. Until recently, they met children at their schools. Terrell nearly panicked when schools went virtual in March, because $15,000 in booked courses threatened to fall off her balance sheet. Then it dawned on her: If schools could host remote classes, so could she.

In April, Terrell began hosting Fashion Works courses over Zoom. Franchisees sent out supply kits beforehand and then ran lessons virtually for students in their bedrooms and kitchens. The pivot did more than keep the business afloat. It actually boosted revenue. Frazzled parents welcomed the opportunity to keep their children productively engaged, and the virtual classrooms proved more flexible than physical ones. “When you’re in a classroom, you max out at 15 to 18 kids,” says Terrell. “But our virtual programs can have up to 27 students at one time.” Her franchisees also don’t need to drive anywhere, which saves them costs and time.

Related: What the Work-From-Home Boom Means for Your Future

The result: Fashion Works is now planning to onboard three new franchisees to meet the surge in demand. When social distancing is no longer necessary, classes will surely meet in person again — but because of its remote-education success in 2020, Fashion Works might be able to continue offering virtual sessions alongside its in-person classes, effectively evolving the business forever.

Here’s another way the work-from-home revolution might have a lasting impact: It has created new competition for brick-and-mortar brands.

The new franchise CPA Moms is a good example. It’s a home-based accounting firm that aims to compete with the likes of H&R Block and Jackson Hewitt — but whereas those brands have physical locations and have total initial investments of $32,000 to $150,000, CPA Moms costs between approximately $23,000 and $39,000. With no lease to deal with, monthly expenses can be just a few hundred bucks.

CPA Moms launched in 2008 but didn’t start franchising until this past April. When the company started expanding in 2011, it was structured under an agency model with a team of accountants from different backgrounds. Some specialized in the finances of nonprofits, while others were experts in real estate or media. That allowed CPA Moms to assign new clients a CPA who knew the intricacies of their industry. “We grew like gangbusters because we had a clear solution to a long-­standing pain point,” says founder Mayumi Young.

In April, when the company started franchising, Young kept the existing model. Instead of buying a region, the way most franchisees do at other brands, CPA Moms franchisees “own” a specialized area of accounting. It’s a model that makes sense only with a virtual business — and CPA Moms is seeing a flood of interest. Young signed two owners within her first month as a franchisor, and with her potential customer base growing increasingly comfortable with virtual relationships, she plans to expand to 100 franchises over the next three years.

Related: Our Top 5 Franchises You Can Run From Your Own Home

As a result, CPA Moms could come out of the pandemic as a strong player in a competitive space. That won’t disappear just because stay-at-home orders do.

Of course, none of this is to say that home-based franchises will topple brick-and-mortars. Restaurants will always need commercial kitchens, full-­service mechanics still need shops, and doggy daycares still need space for pups to run. Plus there’s a contingent of franchisors who view traditional storefronts as a way to legitimize a business and weed out casual franchisees. “Some require an office because they want the franchisee to take the business seriously,” Frandata’s Wiseman says. “Lower-investment businesses understandably have a higher exit rate because people have less to lose.” But for people launching companies during times of uncertainty — like right now — having less to lose is a big gain. If that’s what potential franchisees come to expect, that’s what franchisors might have to continue providing.

For his part, Yoder can imagine a future beyond the pandemic, and it doesn’t involve setting up an office for his ShelfGenie business. “I’m living my dream,” he says. COVID-19 or not, he’ll be working from home.