Elon Musk, said that the same three were completed without major problems.

US aerospace manufacturing company, SpaceX, fired its prototype spaceship, starship, in which engineers and technicians fuel loaded and started testing with SN9 rocket engines and Raptor, three times in less than four hours.

After the first of the three trials, the founder and chief engineer of SpaceX announced via Twitter: “Today at SpaceX it’s about practicing starting the Starship engines. The ship is held in place by massive pins while the engines fire. ” Later in the third test, Elon Musk ensured that all three tests were completed without significant problems. 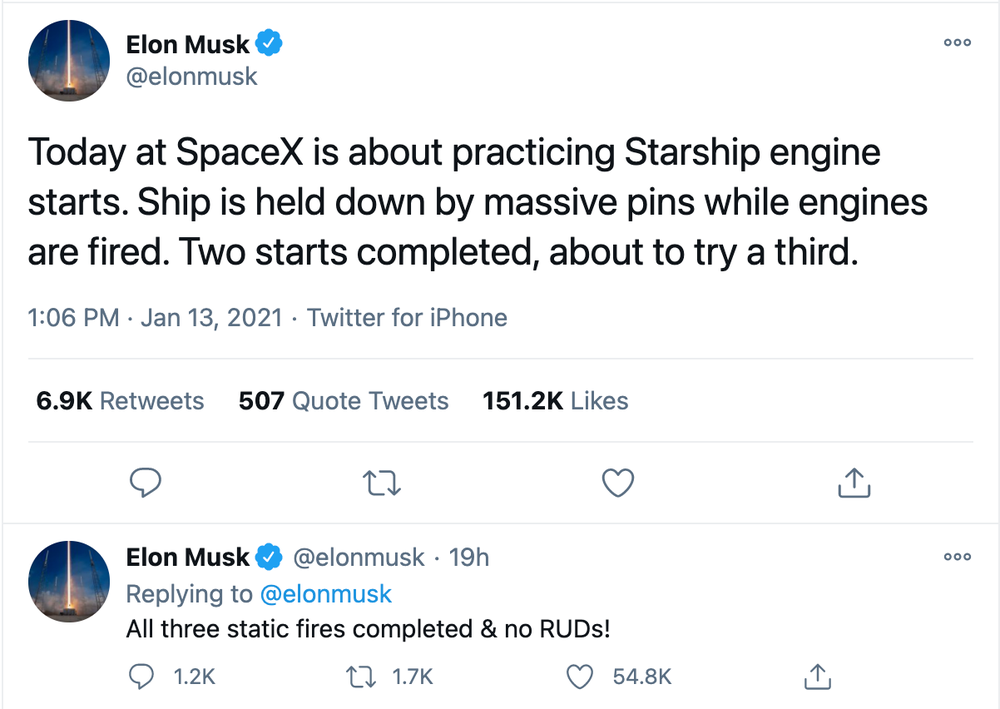 The fact that they are carried out quickly and without major inconveniences is a great achievement, signaling the maturation of the spacecraft’s ground systems, hardware and procedures for the Starship launch program by SpaceX .

What is the purpose of these launch tests?

The businessman indicated that the purpose is to reach a point where someone can “enter and go” to Mars . Although there is talk of a future plan, this company appears to be moving significantly towards a strong launch system, according to the sources.

If the data from Wednesday’s engine checks is beneficial, there is a likelihood that the next step for SN9 will be effective and profitable. The spacecraft is already at a launch station, and will now be checked by Musk and his engineers, for a ‘preparation’ before the expected test flight at about 12.5 km, very similar to the flight made with the SN8 spacecraft in December. This time, the main purpose will be a successful landing, after the latter mentioned has met a fiery end at the site where he landed, after a space journey that had turned out smoothly and almost flawless.

Approval for the launch of the SN9 aerospace vehicle

The Federal Aviation Administration gave SpaceX authorization to launch the SN9 spacecraft on Thursday, Friday or Saturday from its locations near Boca Chica Beach in South Texas. That said, there is a chance to flip the SN9 over for a flight attempt as early as this Thursday. However, there is much concern due to high wind levels, which are expected to remain hostile until – at least – Saturday.

There is much hunger for SpaceX to carry out the SN9 flight, as it has almost completed assembly of the next Starship prototype, the SN10 , at its location near the high bay. Possibly, by the end of January this ship would be blown up, since the company continues to insist on carrying out the activity, given that it has other prototypes in different states.

It is important to mention that the immediate term objective is to demonstrate the orbital flight capacity of the spacecraft . For this, the company first needs to build and test a super heavy rocket, the function of which would serve as the first phase of the starship. This drastic test will observe an aerospace craft launched into orbit and subsequently decide if it can safely return to Earth, resorting to a mix of heat shield plates on the side facing its atmosphere, plus a complicated strategy that will slow down and in the end it will be controlled.

In an interview released earlier this month, SpaceX President and COO Gwynne Shotwell mentioned to Ars that she saw this orbital flight test more likely to happen in 2021 .

Accountability: The Crucial Inner Work that Leads to Success