When Dog Haus launched in 2010, its concept made a lot of sense…for the year 2010. Its mission was to elevate stadium food into culinary masterwork, and it did so by selling dogs and sausages decorated with ingredients such as bacon, pastrami, caramelized onions, and arugula. The three founders, Hagop Giragossian, Quasim Riaz, and André Vener, dubbed their concept “craft casual,” and they built fun, large, airy venues to serve customers. Dog Haus has grown to 50-plus locations since franchising.

But in the decade since, much has changed with how Americans eat. People increasingly order food through Grubhub or Uber Eats. Dog Haus responded by expanding its reach through ghost kitchens — delivery-only facilities with no seating, parking, or signs. Then, when the pandemic hit, foot traffic dropped even more — and the ghost kitchens presented an intriguing opportunity. If Dog Haus could sell food without a dine-in location, why did its founders have to stick to just selling Dog Haus–branded food? Couldn’t they sell, well, anything?

Related: Why Ghost Kitchens Are the Next Big Thing for Food-Service Franchises

In March, the three Dog Haus founders put that question to the test by announcing an ambitious roster of brands: It’s called The Absolute Brands, and it consists of seven new QSR concepts (five are currently open and two more are in the works) that have no physical stores and operate out of existing Dog Haus locations. (After all, Dog Haus kitchens suddenly had excess capacity.) If a customer orders from any of these brands — such as Freiburger, Bad-Ass Breakfast Burritos, or the plant-based concept Plant B — they most likely won’t even know the food is made in a Dog Haus kitchen (unless they happen to drive over to pick it up). 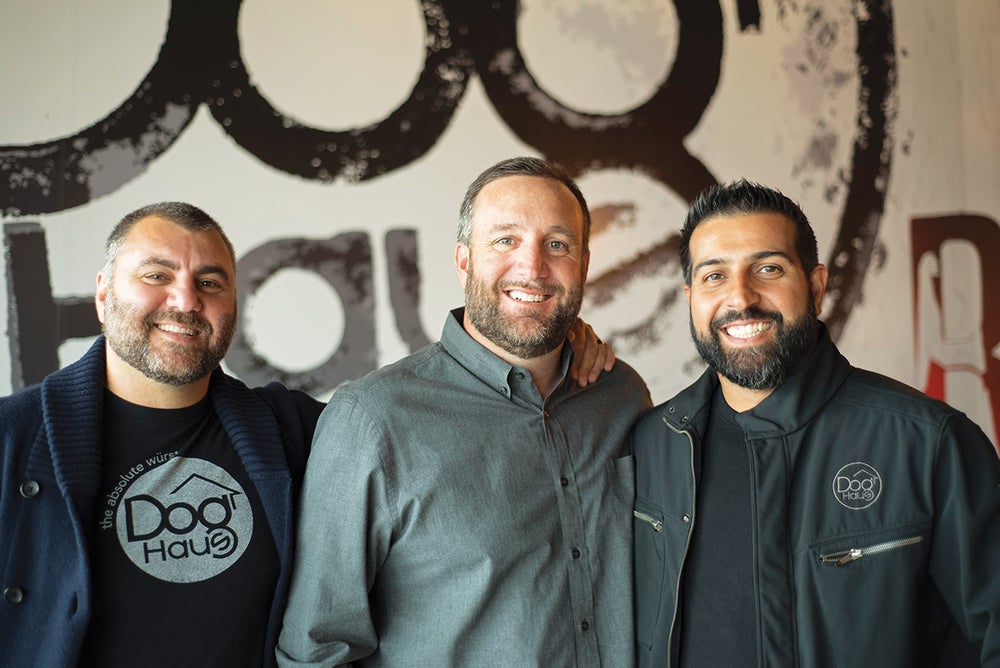 The three founders recently sat down with Entrepreneur — virtually, of course — to explain how The Absolute Brands works.

It sounds exhausting to launch multiple restaurants during a pandemic. How were you able to do it so quickly?

Giragossian: We began testing The Absolute Brands back in January, before COVID. At first we thought we’d just run them from the ghost kitchens, but when the pandemic happened, we thought they could be a lifeline for franchisees. The brands weren’t fully ready to launch at the time, but we thought that if the franchisees were down, we could figure it out as we go. And they jumped at the opportunity.

But how? Is it really that easy to run eight restaurants from one kitchen?

G: It’s been fairly seamless, actually. We started with just three concepts, and we’ve been rolling out the others since. These concepts require no vendors, no new kitchen equipment, and zero capital expenditure from franchisees. As far as products go, we only added two or three things — like a tortilla, for example, to wrap the burritos. We changed some of the packaging so we’re not sending out everything with Dog Haus branding, but aside from that, everything is consistent with what franchisees were already doing.

Related: 5 Ways to Pivot Your Business for the New Normal

Instead of launching new restaurants, why not just add more items to your existing Dog Haus menu? Wouldn’t that be easier?

Riaz: People aren’t necessarily searching by brand on the delivery service providers [DSPs]. They’re searching what they want to eat.

G: Plus, multiple brands allow our franchisees to be flexible. They can turn these virtual concepts on and off as needed to fill out day parts.

Wait — you can just turn off a restaurant?

R: That’s the beauty of this. If somebody wants to turn off Bad-Ass Breakfast Burritos during a high-volume time of the day when they need more grill space for burgers, they can do that.

V: And when a brand is turned off, it’s gone from the DSP platform. It doesn’t say “closed.” It just doesn’t show up in the search.

Related: 4 Ways to Ensure Your Business Survives the Reopening of the Economy

It’s notable that some of The Absolute Brands are in direct competition with each other. The obvious example is Bad-Ass Breakfast Burritos and Huevos Dias, which are both breakfast concepts. How concerned are you with the success of any of these brands on an individual level?

R: I’d rather have us compete with us than compete with somebody else. Effectively what we’ve done is allow our operators to run eight different restaurants within the same four walls. So they’ve got a leg up on the competition.

V: As long as we’re collecting dollars to fill up the total sales for the day, we don’t care if one brand is 25 percent and another is 10 percent. If there comes a point down the line where eight brands just isn’t working for some reason, we could either fold some of the items from one into another or cancel it and create an entirely new brand. We could close something overnight and launch something new the next day.

There’s a potential for confusion with multiple brands operating under one roof. Someone could order from Plant B, and when they type in the address, their GPS takes them to Dog Haus. Has that been an issue?

R: Sure, sometimes drivers are confused when they come in for pickup, but they learn. It’s important for us to have The Absolute Brands live in a virtual space. Dog Haus will always be our first priority, and we don’t want to have all the other brands’ signage on the windows or doors.

V: That confusion can also create some excitement. When our fans order from Bad-Ass Breakfast Burritos and pull into Dog Haus, they’re like, “Wait — are you guys doing burritos now?” Once we explain that it’s delivery only, they go off telling their friends about it.

Related: 7 Things Restaurant Entrepreneurs Must Do to Survive and Thrive During the Great Pandemic Depression

I’m sure it’s hard to compare pre- and post-pandemic numbers, but what can you say about The Absolute Brands’ success?

V: At least 25 percent of our sales are coming from The Absolute Brands right now, and our same-store sales from Q3 are up double digits over 2019. And that’s despite most of our dining rooms being shut down.

G: I don’t think we’re embarrassed to say this, but one of our restaurants has been struggling since it opened two years ago. We didn’t know why. It has a great operator and a great location, in Chicago’s Lincoln Park. But at the end of 2019, the franchisee was like, “I don’t think I’m going to make it.” Then the pandemic hit, and he started serving The Absolute Brands. Since then, he has tripled his sales. So maybe Dog Haus wasn’t going to survive in Lincoln Park, but Bad Mutha Clucka and Bad-Ass Breakfast Burritos do really well.

V: The Lincoln Park location went from being in the bottom three stores to the top three. Now that franchisee is in talks to expand his territory.

Have you discussed what will happen if one of these brands turns out to be a huge hit? Would you turn it into its own franchise?

G: We’d love that problem. We’re either going to be able to peel off some of these concepts and do them on their own or just let them solve for the fact that not everything works in every location.