This Vegan Mushroom Gravy recipe is flavorful, easy to make, and perfect for any meal! You don’t have to sacrifice gravy if you don’t eat meat, this mushroom gravy will do the trick!

What do you pour gravy on? Everything! We love this vegan mushroom gravy with our healthy mashed potatoes or root vegetables. 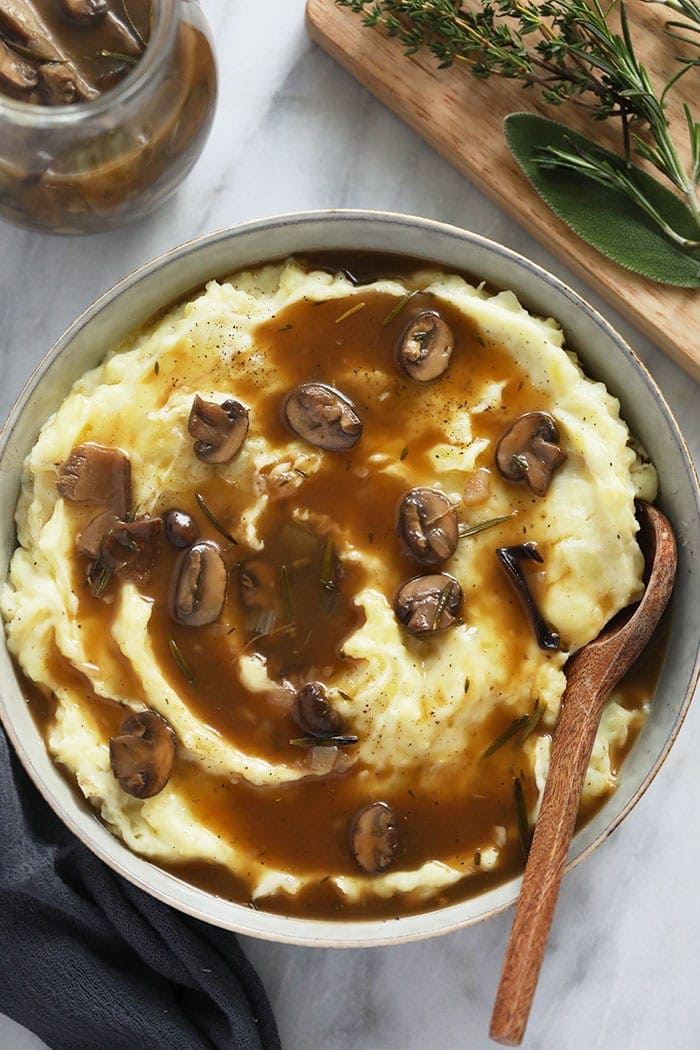 Gravy for Everyone (Even Vegetarians and Vegans!)

This vegan mushroom gravy recipe goes well with any vegetable side or with main dishes like this harvest grain bowl or this sous vide turkey!

Whether you are a meat-eater or not, the vegan mushroom gravy won’t leave you disappointed!

What makes a gravy, gravy? Some gravy is made from drippings of a turkey or chicken, but the base of this mushroom gravy recipe is made with a vegetable broth, mushrooms, onion, garlic, and more. Then, it is thickened with tapioca flour.

Here is everything you’ll need to make for this vegan gravy recipe as well as some substitution options if you don’t have everything you need!

Olive Oil: The olive oil in this dish adds a deliciously deep and complex flavor. Cooking all the vegetables and aromatics in olive oil will create a great base for this mushroom gravy. If you don’t have olive oil in the house, feel free to substitute the olive oil for butter or avocado oil.

Mushrooms: Obviously, mushrooms are the star of the show for this vegan mushroom gravy. It has a delicious umami flavor that will leave you scraping your bowl for every last drop.

We used an assortment of mushrooms for this vegan gravy recipe! Feel free to use what you have on hand! We recommend crimini, Bella, or portabella mushrooms. However, even dried mushrooms will work if you’re in a pinch!

Just be sure to soak your dried mushrooms in water for about an hour. Then, discard access liquid and use mushrooms as is for the recipe!

Onion + Shallot + Garlic: These delicious vegetables are a great flavor base for this mushroom gravy! Be sure that you cook the onion, shallot, and garlic down enough. It’s even ok to create a fond at the bottom of your pot (the little brown bits at the bottom of the pot), it leaves great flavor!

If you are out of onion, shallot, or garlic, feel free to add more of one of these three ingredients to replace the other. It will taste a bit different, but will ultimately taste delicious!

Red Wine: The red wine is in this mushroom gravy serves as a delicious de-glazer of your pot and adds another level of flavor to the gravy!

Vegetable Broth: We use broth rather than water in this recipe because it adds a bit more flavor and depth. If you don’t have vegetable broth on hand, feel free to use a bouillon cube or mushroom broth!

Fresh Rosemary + Thyme + Sage: The herb bundle in this gravy adds the earthy and traditional gravy flavor that you’d expect in any gravy! Be sure to tie the bundle rather than just throwing the herbs loosely into the gravy. This will ensure you won’t have rouge herb stems on the loose!

Tapioca Flour: We used tapioca flour to thicken up the herb bundle. We like that tapioca flour doesn’t leave any after taste as well as it is gluten-free! If you don’t have tapioca flour, feel free to use corn starch or arrowroot powder. Can I add other vegetables to mushroom gravy?

Yes, you can add other vegetables to this mushroom gravy recipe! If you are planning on using a root vegetable (potato, carrot, parsnip, celery) in the mushroom gravy, be sure to cook them in olive oil before adding the onion, shallot, and garlic to the pot.

You want to make sure the vegetables cook down enough before cooking up the mushrooms! Adding other vegetables will also change the flavor of the gravy a bit, but would also be delicious!

How do you store mushroom gravy?

We recommend storing mushroom gravy in the refrigerator for up to 7 days in an air-tight container.

To freeze: You can also freeze this mushroom gravy to save for later! Simply let the gravy cool completely before placing in an air-tight container in the freezer for up to 3 months.

How do You Reheat Mushroom Gravy?

Reheat refrigerated mushroom gravy in a small sauce pan over medium heat on the stovetop until warm.

If your gravy is frozen either allow to fully thaw before reheating on the stovetop, or reheat frozen gravy over low heat until thawed to avoid uneven reheating.

What can you serve with mushroom gravy?

There are so many options of main dishes and sides to serve with mushroom gravy!

If you are a carnivore, here are some dishes that would be great smothered in mushroom gravy!

Here are other vegetarian options you could serve this mushroom gravy over!

Can you use meat drippings in mushroom gravy?