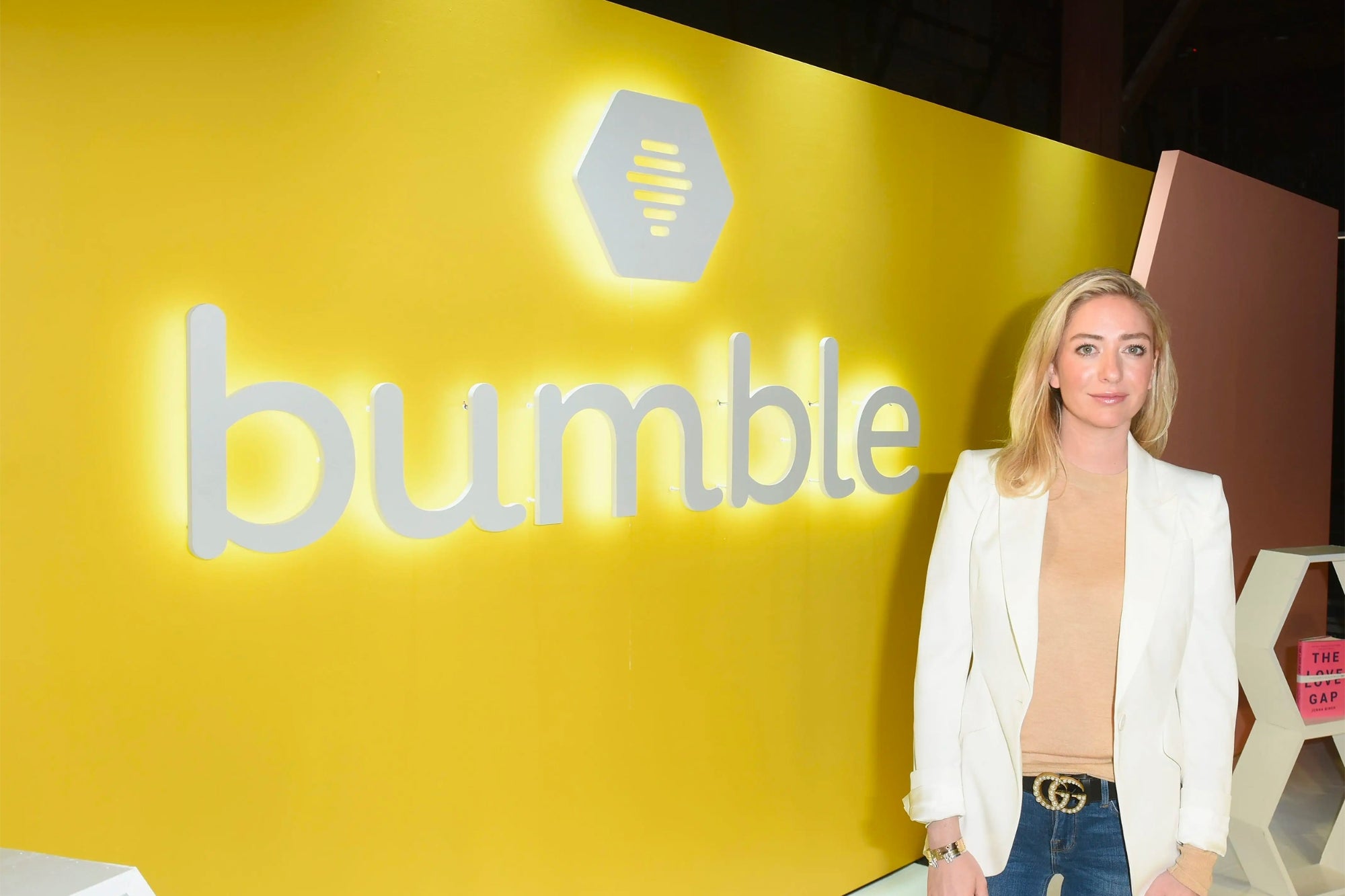 Bumble, one of the top online-dating companies, publicly filed its IPO paperwork in January. Now, it’s planning to list its shares on the Nasdaq stock exchange today under the ticker, “BMBL.”

On Monday, Bumble raised the size of its stock market offering from 34.5 million shares to 45 million shares. Bumble stock will be priced between $37 to $39 per share. The company is looking to raise up to $1.8 billion of proceeds at a valuation of $8 billion, according to Bloomberg.

Tinder cofounder Whitney Wolfe Herd helped launch the dating app in 2014 alongside Andrey Andreev, the founder of the dating app Badoo. They designed the app with the goal of creating a female-focused platform that would operate as a safe place for women to date without judgment.

MagicLab, the umbrella company for Bumble and Badoo, grew rapidly. In 2020, Wolfe Herd took over as the CEO, renaming the parent company Bumble. The company now has about 42 million monthly active users across both Bumble and Badoo.

We read through the company’s 247-page S-1 filing to learn more about Bumble’s plans. Here are four key takeaways.

Related: The Founder of Bumble Reveals How the ‘Question of Nine’ Can Help You Stay Focused

Bumble will operate as a ‘controlled company’ under Blackstone

The female-first dating app will be a “controlled company” following its initial public offering. That means it will be largely under the command of its sponsor, Blackstone, and its founder, Whitney Wolfe Herd, who will own 96% of the voting power of the Class A and B common stock.

Bumble noted in its filing that the outsized voting rights will limit other stockholders’ influence on the corporation. But, it also reduces the company’s exposure to potential activist shareholders who may push the company to focus on short-term goals instead of the long-term mission.

Investment firm Blackstone, which has assets under management of over $584 billion as of last year, won’t always have outsized voting rights, though, as they’re subject to terminate after seven years on a “time-based sunset.”

Bumble’s revenue increased this year, but its costs are growing

In the first nine months of 2019, Bumble’s revenue was $362.6 million, and in the same time period the following year, the company brought in $416.6 million, according to its filing.

But the revenue growth was stymied by a widened earnings loss. In the first nine months of 2019, the company saw $68.6 million in net earnings, but the following year, it instead saw an earnings loss of $116.7 million.

Bumble said costs are continuing to grow with some investments reducing operating margin and profitability. “If our investments are not successful, our business and financial performance could be harmed,” the company wrote in its filing.

Bumble needs to build up its subscription base

As Bumble’s active monthly users for the third quarter on the app top 42 million, the company is set to capitalize on the online-dating trend, though Bumble’s success will largely be driven by its monetization efforts.

The online-dating market is projected to grow about 13% annually from $5.3 billion to $9.9 billion in the next five years, according to OC&C Strategy Consultants.

The company plans to increase paying users and its average revenue per paying user by developing new features and improving existing features, including advanced filters for finding matches, as well as Beeline, an option that shows users people who have already swiped right on their profile.

Bumble also plans to test new pricing strategies, including pricing tiers and user categorization by subscription options. The filing notes that charging for more features could also put the company at risk of losing users in a market already overwhelmed with dating apps.

An overloaded market is one of Bumble’s biggest risks

In its filing, Bumble highlighted the increasingly competitive nature of the online-dating market.

Online-dating users typically use more than one app, and switching between applications is so easy that it is difficult for users to maintain loyalty to one platform. The company notes that users are often switching between platforms looking for different ways to meet people online.

While Bumble and Badoo are currently the No. 2 and 4 dating platforms, according to Sensor Tower, the filing emphasizes the volatility of the market, especially as companies like Facebook move toward creating their own dating sites.

Bumble outlines in the filing how it plans to continue to compete in the market through its focus on female empowerment, though the company acknowledges its mission comes with some risks.

Related: Bumble’s Austin Headquarters Is All About Good Vibes

The company could be judged more harshly than other dating apps. Bumble’s platform could be overturned by any situation that could make the company appear disempowering to women, including user complaints or reports of unprofessional behavior at the company.

Bumble has struggled with similar reports in the past. In 2019, a Forbes investigation into Badoo revealed a history of drug-fueled parties and sexist behavior.