The company broke record in value, after a fight between redditors and investors.

GameStop is an American retailer of video game products, electronics and consumer games. However, in recent times this chain has been identified by various controversies related to a continuous loss in the value of its shares. However, it has recently become a protagonist due to a surprising increase in value in its shares, this thanks to a subreddit .

Despite the fact that the launch of the next generation consoles did not obtain positive financial results, in previous days there was a significant upswing in its shares. Now it is known that this was due to a stock market phenomenon that included Reddit users and, above all, too much speculation, which generated a historic rise in GameStop shares and that they were already beginning to decline. 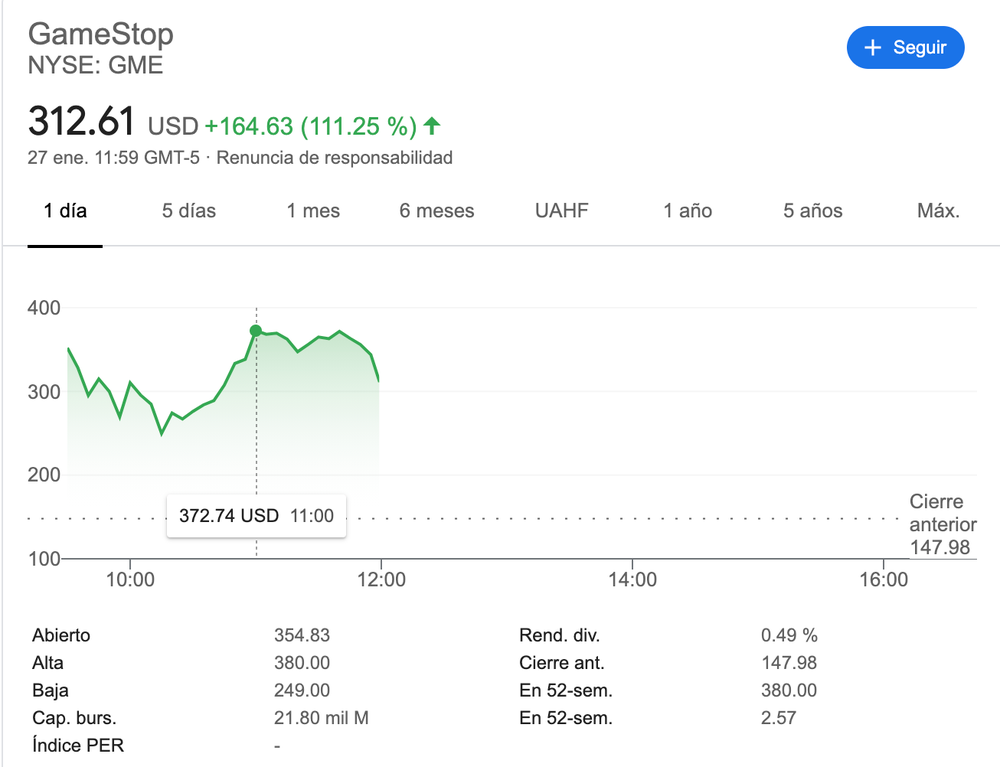 The company GameStop (GME on the stock exchange) began to attract the attention of users, unexpectedly, in previous days for its sudden increase in the value of its shares. January 22 was more evident, as it started the day with $ 42.59 , but reached $ 76.76 , an increase of almost 80 percent.

With the above in mind, it must be remembered that the highest value that its shares had achieved was in 2007 , when it achieved $ 63.30 , according to information from GamesIndustry.biz

That said, last Friday, due to this rise, a couple of times its operations in the stock market were suspended. This was not the end of the situation, since on Monday, January 25, the price rose even more and reached as much as $ 159.18 dollars.

Surely there are many doubts about for what reasons and how it was that GameStop gained the trust of certain investors and they were invited to bet on it. The truth is that everything was due to external factors. Although the chain has been losing economic relevance with the passage of time due to the fall in demand for physical games to benefit digital ones, the pandemic and other elements, its actions soared, GameStop had become one of the values WallStreet with more short investors. Basically, this means that it translates into the bet that the value of the company continues to fall and that they benefit from the losses.

How did the rise in stocks start?

The phenomenon is attributed to a fight between Reddit users, investment institutions and high speculation by shareholders. Likewise, it is associated with the fact that said event involved users of the WallStreetBets subreddit, who were guided because some YouTube and TikTok characters mentioned that the company had a large amount of short assets – approximately 71.2 million shares – which generated the sudden acquisition of actions.

What does a short contraction refer to?

There are some ways to make money through the stock market, one of these is when you bet low on a company, which allows you as an investor to make money when the share price of that company is low.

When talking about shorting a share, it refers to when a borrowed share is sold when it has a high value and then get it again (acquiring it) when it falls in price and thus keep the difference when returning it to its owner. If all went well, the price of this stock would have dropped, the stock would be bought and returned to its owner with a profit.

She Left Google at 25 to Bootstrap Brit + Co, and Raised Over $50 Million. Now, Brit Morin Is Here to Kill the Lie Destroying Your Dream: "Everything Has to be Perfect."

Elon Musk VS Jeff Bezos in the race for satellite internet