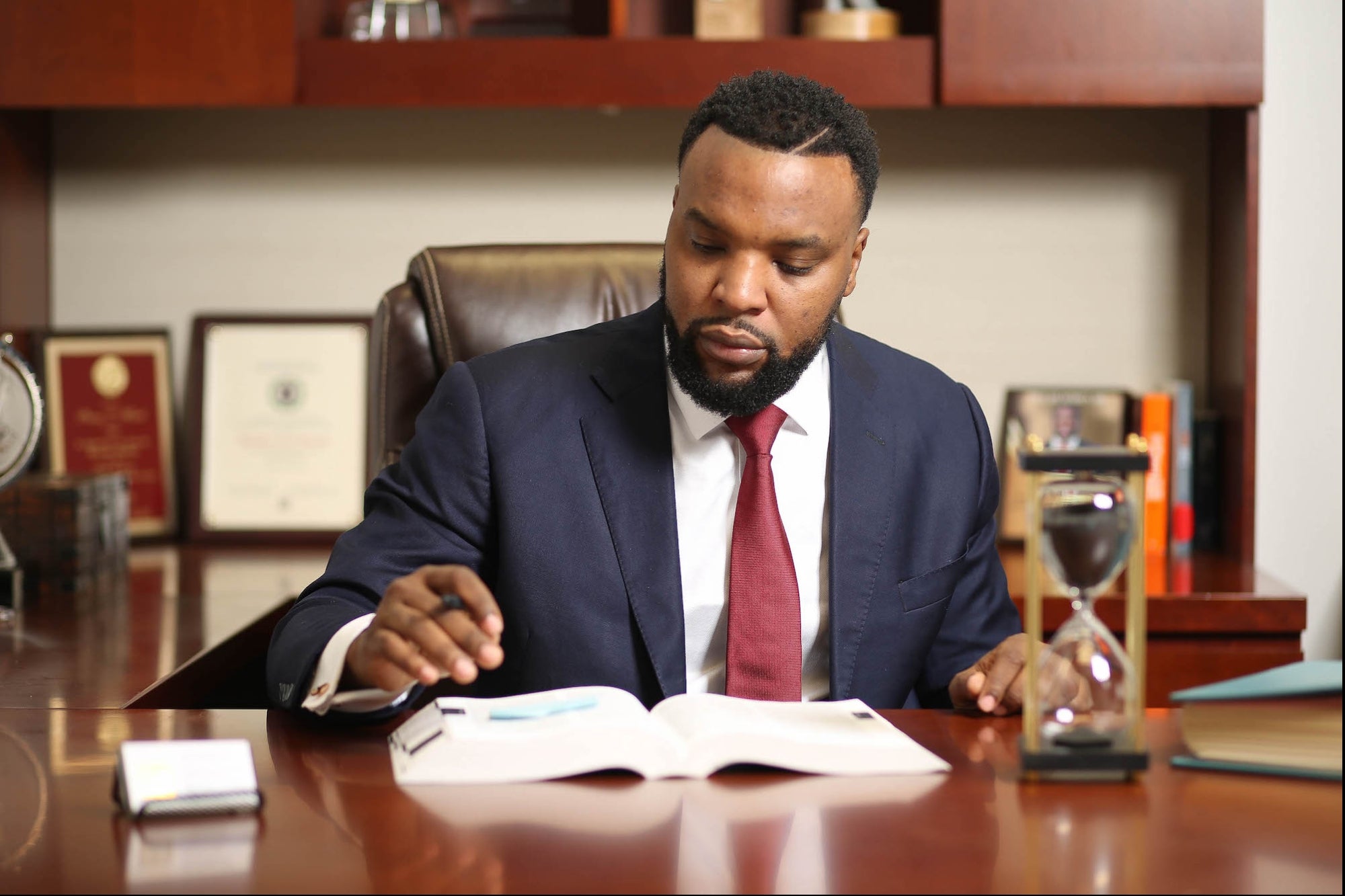 Civil rights attorney and activist Lee Merritt is on a mission for social equality, to stop mass incarceration and end the war on drugs. While his high-profile law firm is dedicated to helping victims of police brutality, hate crimes and corporate discrimination, he’s also committed to making mental health resources accessible to everyone who needs them through his new organization. He spoke with Jessica Abo about Limitless Resource, ways you can help and why destigmatizing the need for mental health resources is so important.

Jessica Abo: Lee, tell us a little bit about your career path.

Lee Merritt: I was born in Los Angeles, California, in a community commonly known as South Central, and I was tethered to the prison industrial complex. My father was incarcerated most of my life and remains incarcerated to today. My mother, being a single mom, raised us to appreciate our culture, to appreciate our community and where we came from, but to try to do better.

I eventually went to Morehouse College in Atlanta, Georgia, obtained a degree in history and began teaching in inner-city Atlanta and Camden, New Jersey, for a bit before deciding to go back to law school myself.

As an attorney, I worked initially with the Cochran Firm and then I started my own practice that focused primarily on civil rights. The goal was to give families representation when dealing with issues of police brutality, of corporate discrimination and any other forms of racial bias.

So many people are familiar with your work because they’ve been reading about you for years, but what do you want people to know about you when it comes to who you are personally and professionally that they might not find in your bio?

Merritt: How much I care. The reason that I care so much, not only about the cases and the outcomes of the cases and in the future of this country, is because I’m personally invested. Being raised as a young Black man in South Central impacted the way that I view the world. I’ve watched the criminal justice system shape my community, incarcerate every male figure that I knew growing up. Now, as an adult Black male, I have the responsibility of being a role model and an example for my children. I think about them every day when I go into the courtrooms, and I think about how safe our current society is to them, how much our society says about their value, about their mental health. When I commit myself to the work, it’s not just me hoping to be successful as an attorney, but this is a fight that is deeply personal, that will impact my family for generations to come.

What was it about the work you were doing in the courtroom that made you want to start Limitless Resource?

Merritt: In 2017 I came to represent the family of a young man named Jordan Edwards. He was a 15-year-old from North Texas, a young football player who had attended his first high school party with his brothers. When he was leaving the party, police suspected that the car was involved in some criminal activity, and a police officer named Roy Oliver lifted a high-powered rifle and poured five rounds into the car, striking Jordan Edwards in the head and killing him.

This was the first family that I had to deal with that had lost a child in such a traumatic way. We had the responsibility of walking them through the criminal process, walking them through the civil process, and I kept seeing myself in this family. I saw the damage, the ripple effects that this tragedy not only had on the precious life of Jordan Edwards, but on the impact on his father, his mother, his aunties, and most importantly, his brothers who were with him at the time that he was killed.

It’s something that they never fully recovered from. They would tell me that when they closed their eyes at night, they would see smoke coming up from their brother’s head. It was something that they could not unsee. And I knew that no matter what the criminal outcome was, and it was the first case in 40 years that a police officer in Dallas actually went to jail for murder, and no matter what the civil outcome may be, and that case is still ongoing, I knew that that family needed something more. They needed a resource that could help them heal, that could help them grow and help them preserve the legacy of Jordan Edwards.

Jordan Edward’s case was my first wrongful death case. I didn’t realize it at the time, but it impacted me directly. I entered into a depression because I wasn’t really that aware of mental health, and it wasn’t something that was discussed in the communities that I grew up in. I didn’t know what was going on. I was gaining weight. I had problems sleeping. I had problems focusing, and I thought that I should just tough it out and go to the gym and pour myself into the work.

How does Limitless Resource work?

Merritt: We hope to pair families with resources in four areas. The most important area that we discovered is mental health services. Having a therapist that you can identify with, one that speaks to your specific needs, is very important. And so the first thing we did, working with Dr. Ish Major out of New York, was gather together a pool of therapists that could be as diverse and transparent and available as the group of people that they were serving.

Beyond the mental health resources, there are also some practical needs. Families often lose a breadwinner, or they’re so devastated by the event that they cannot continue their normal course of work. So we have financial planning resources. We work with various agencies that help the families gain some financial stability during the time of chaos and even beyond that.

In addition to the therapy resources and the financial planning resources, we also try to serve families in two other ways. The first is advocacy. Every family that I’ve encountered is concerned primarily with the outcome of the criminal and civil cases, that they get justice through our legal system. And so we pair them with activist groups and other patterns that we’ve seen have been successful in helping families actually receive justice.

Then, lastly, building the legacy of their loved one. Normally, that’s in the form of a foundation, helping the family set up a foundation that will reflect the character of the person that they lost and allow that foundation to continue to serve the community and the world and the way they believe their loved one could have.

How can someone support your work?

Merritt: When people often look for ways to give back, what they really want to do is show their empathy and their support for families who are actually bearing the brunt of this culture that we’re addressing. And they can serve families in their areas of strength. And so when I first got into this work, my area of strength was law, and it remains my area of strength as an attorney. But what I found the family needed was financial planning, which — I wasn’t the best person to provide for that.

At Limitless Resource, we’re connecting families to individuals and entities that can give them the financial resources planning that they need, as well as the therapy, as well as the advocacy, and that legacy, that foundation. If you’re interested in giving back and you know that you can offer support in one of those four areas, by signing up with Limitless Resource, you can become a resource to the family. The other thing people can do is donate to Limitless-Resource.org. There is such a need for financial support for all of these services to take place, and those resources often go everywhere but to the family, and that’s the goal of the whole organization.

What advice do you have for leaders who want to support their employees and people in their personal lives through a crisis?

Merritt: We need to destigmatize receiving mental health resources. The truth is it should be a normal part of our day, the same way that we focus on our diet or exercise. We should really focus on ways we can improve our mental health. Our mind is with us. It is a part of our everyday decisions and how we operate in this world, and we need to take better care of it.

And it’s okay to shop around. It’s okay to say, ‘I am seeking therapy, but the person that I’m receiving it from doesn’t meet my needs.’ A lot of people feel shame that, ‘Oh, I saw a doctor, and they told me what to do, and I didn’t agree with them. Maybe I’m the problem. Maybe I’m the most uniquely impacted person on the planet.’ And it’s just not true.

The last thing I would say, of course, is to make it personal. Mental health resources are something that we all need the same way that we need to feed our bodies, the same way that we need to exercise. We need mental health resources to be a daily part of our routine. When I tell you that it’s normal to go through this, it’s because I’ve gone through it, and we all went through it, and it’s okay not to be okay.

Related: This Company Is Keeping Hundreds of Ugandan Women Employed During Covid

Is the Richest Person In the World Elon Musk or Jeff Bezos?

What Mobsters Can Teach Elon Musk About Succession Planning