No one knows the allure of Gossip Girl as well as Andrew Warren.

The 28-year-old is a NYC native and the ringleader of his socialite friend group, known as the Snap Pack, which includes Kyra Kennedy, JFK’s great-niece, and Gaia Matisse, great-great-granddaughter of French painter Henri Matisse. The friend circle is oft-labeled by the press as the “real life Gossip Girl,” and Warren cites the show as inspiration in his own career.

At just 14, Warren held his first-ever charity event, throwing a red-carpet teen party at NYC nightclub Marquee for Gabrielle’s Angel Foundation. As he tells it, he got his hands on every NYC school directory and sent out invites to parents for a sold-out event, for which he had secured Gossip Girl star Ed Westwick as a host.

By age 20, he had founded his own fashion line inspired by “that Barney’s, Blair Waldorf girl,” he told Insider, in which he dressed “it girls.” This gave him insight into what people want, he said, allowing him to parlay his branding and networking skills into his latest venture: CollXab, a lifestyle agency he cofounded that works with luxury brands and the socialite-influencer set.

Related: The Future of the Beauty Industry in an Increasingly Virtual World

CollXab, Warren said, is reworking the conventional agency model to “move away from what was to adapt to what is,” focused on building relationships that will help brands nab organic partnerships and help talent market themselves. He’s spent the past several months working with clients behind the scenes for an end-of-January launch.

From fashion to public relations, with charity in between, Warren may have found his true talent: capitalizing in all his endeavors on society’s fascination with the youthful side of New York’s upper crust — a magnetism that captured legions of Gossip Girl fans.

Designing for the ‘it girl’

Warren is the grandson of the late David Warren, a fashion fixture in NYC history. A garment manufacturer and designer whose name is inscribed on the “Garment Worker” statue in the Garment District, he founded The Warren Group, which sold clothes in department stores such as Neiman Marcus and Saks Fifth Avenue. Warren told Insider that he’s always aspired to be like his grandfather.

The first step to achieving this dream came midway through college, when the owner of Blue & Cream, a boutique with locations in the Hamptons and NYC, asked Warren to do a pop-up fashion line. Warren said he immediately knew he wanted to turn it into a full-fledged brand. That became Just Drew, which launched in 2013.

At a time when many designers were venturing into streetwear, Warren said he chose an image more authentic to his own experiences: Gossip Girl. “That was the style of the clothes and the city I grew up in and honed my love for fashion, and I wanted that feel for Just Drew.” 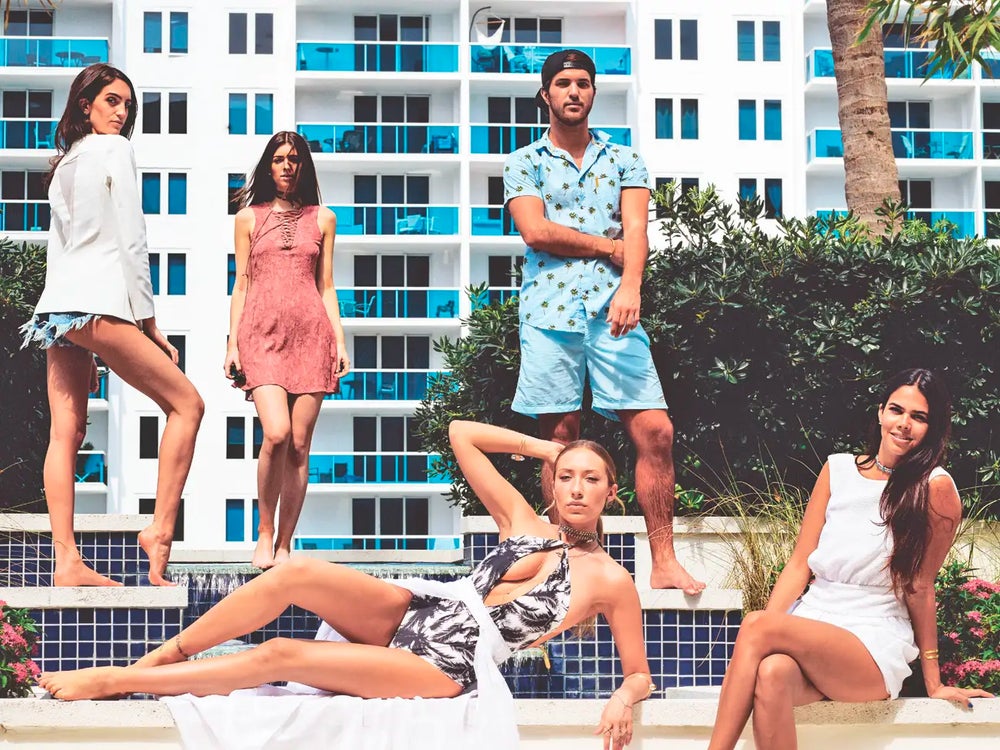 So, he turned to his best friends and NYC it girls, Kennedy and Matisse, as his original muses, designing off their unique styles and using them as models. As the line evolved, he said he began catering to the working “it girl” — picture a post-college Serena and Blair.

Warren worked with a seasoned designer his parents had hired, per the New York Times, and his friend, Blake Frank, worked behind-the-scenes as a senior creative assistant. But Warren wore many hats, from creative directing and working with models to organizing media interviews and planning the afterparty.

Clothes from the line cost anywhere from $195 for a cowl silk neck to $500 for a customized sequin bomber jacket. He had a fashion show at The Plaza sponsored by Aston Martin, saw his retail line in Barney’s Japan and picked up press in fashion staples like W and Teen Vogue.

He paused Just Drew during the pandemic as he watched fashion and retail decline, he said. But he had already picked up the right networking and branding skills for his next move.

During the summer, Warren connected with former publicist Arleigh Banner, currently the events director of The Surf Lodge in Montauk. Banner was working on creating an agency called CollXab, and brought Warren on board to act as her creative counterpart.

Together, they’ve entered a competitive, growing landscape that’s weathered hits by the pandemic. Research firm IBIS estimated that industry revenue for public relations agencies has increased to at an annualized rate of 0.2% to $14.1 billion in the past five years. That includes a 12.3% drop in 2020 due to the pandemic.

But Warren, the self-proclaimed Kris Jenner of his friend circle, is already ahead of the game with his high-society connections. He also said CollXab differentiates itself as more lifestyle agency than traditional public-relations agency, focused on building relationships by doing everything from securing press deals to organically integrating brands into socialite and influencer communities. Just as Just Drew was based on a certain lifestyle, Warren said, CollXab aims to turn its clients into its own lifestyle.

Related: Why the Founders of Senreve Built a Fashion Brand in Silicon Valley

“I bring a certain life to brands to show a fun and exciting side to them, so people seek to make it part of their own lifestyle,” he said, adding that he combines high energy with upscale fun. For example, instead of working with the “traditional influencer” who poses with a product, he said, he would organically integrate brands into his circle of friends at events. Warren said his friends call him the Kris Jenner of their friend circle.

Warren, who has 203,000 people following his snapshots of NYC’s social scene, also leverages his own influence. “Having an organic following based on interest in my lifestyle allows me to create content that makes people want to have that product at their next event, too,” he said.

Experts expect more public relations firms to invest in the coming years in influencer marketing, which is valued as an industry at $9 billion, and is estimated to reach $25 billion by 2025.

CollXab has two divisions. The first includes representing talent for social media partnerships, including the likes of Ava Dash and Michaela V. Tapping into the world of influencers is a wise move in keeping up with competition.

The other half of CollXab works with brands that cater to the youth savvy set like Nate, the gifting app that made the rounds of influencers like Sophie and Charlotte Bickley and Sweats and the City. Warren said he also hopes to help older luxury brands work with younger generations to attract a new audience that’s still on-brand for them. He added that he wants to stay authentic with the clients and brands he works with.

Right now, CollXab is focused on big hubs in the US, like New York City, Miami and Los Angeles, but Warren said they hope to spread out eventually. “We want to make real noise in this industry,” he said. “I think it’s a new era, not just for myself but the world.”

An eye on events

There’s one thing that CollXab can’t do a lot of right now, though: events.

Having planned events at New York Fashion Week and Art Basel and for charities like Operation Smile and Teen Effort, Warren prides himself on bringing together “all types of people from different worlds, backgrounds, and career paths.”

Over the summer and early fall, he held a handful of intimate outdoor dinners that he said were in compliance with the NYC’s safety guidelines with pre-testing. That included a 15-person Halloween dinner that raised money for Project Zero, which works to protect oceans from climate change. He has since paused events as coronavirus cases began ticking up in the state.

In a post-Covid world, Warren said he hopes to make event planning a big part of his career. He also envisions possibly juggling CollXab and Just Drew when the pandemic is over. “I never really hang up anything for good,” he said.

For now, Warren is busy selling the enticing image of the young and elite for CollXab clients as well as building his own personal brand.

“Get ready to see the real Andrew,” he said. “Just like Paris Hilton proved how business-savvy she was, I plan to show everyone that side of me as well.”

Is Working from Home Here to Stay?