A Massachusetts-based user files a class-action lawsuit calling on the court to demand Robinhood pay damages to affected users and reinstate GameStop on the stock-trading platform.

UPDATE: Robinhood is backtracking on its decision, and will permit “limited buys” of new shares in GameStop and the other affected stocks starting on Friday.

Robinhood is now facing a class-action lawsuit for blocking users from buying GameStop shares in the ongoing “meme stock” craze.

Hours after the stock-trading app began limiting the share buys, a Massachusetts-based user named Brendon Nelson filed a class-action complaint against the company, demanding it pays up in damages.

“Robinhood essentially abandoned its customers altogether by pulling GME (GameStop), a standard of care so far below what is required for a business engaging in time-sensitive trading services that it amounts to a complete abandonment of its duties,” Nelson claims in the lawsuit, which was filed in a US District Court in New York.

Related: What Is Going on With GameStop? Meme Stocks Explained

The same complaint alleges Robinhood broke financial regulations under FINRA by failing to “make every effort to execute a marketable customer order that it receives fully and promptly.”

“Robinhood is pulling securities like GME from its platform in order to slow growth and help benefit individuals and institutions who are not Robinhood customers but are Robinhood large institutional investors or potential investors,” it adds.

Despite the class-action lawsuit, it’s important to note Robinhood’s customer agreement says the company has the power to prohibit stock trading for users at any time.

Nevertheless, Nelson is calling on the court to force Robinhood to pay monetary relief to all affected users. The class-action lawsuit is also demanding the app reinstate GameStop on the stock-trading platform. 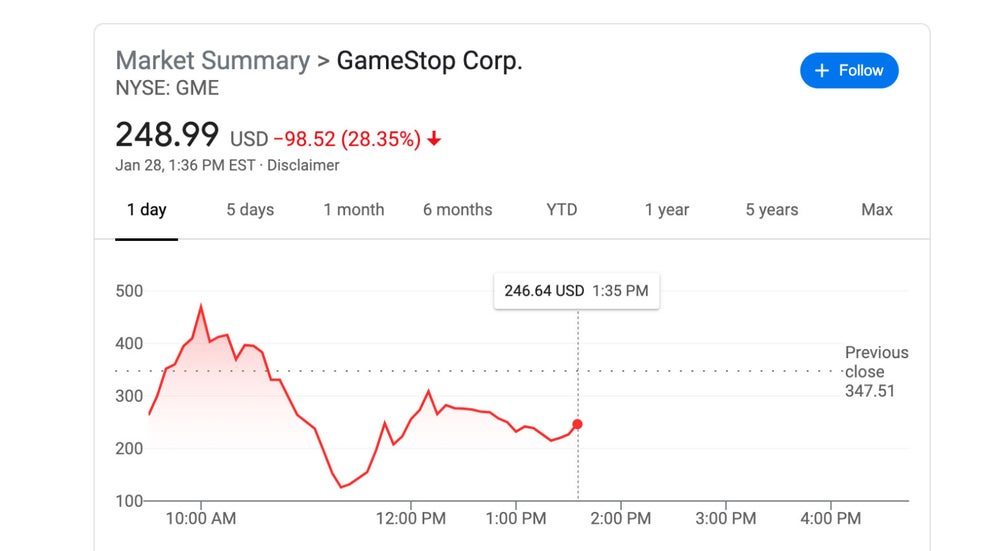 Robinhood didn’t immediately respond to a request for comment. But the company decided to block share buys for GameStop, AMC, BlackBerry, and five other stocks on Thursday, citing “recent volatility” in the market.

Indeed, the share prices for the companies had been soaring, thanks to collective action from users on a Reddit forum called r/wallstreetbets, which has over 4.5 million followers. They banded together to purchase stocks that hedge funds bet against. The stock buys caused GameStop to skyrocket from $17 on Jan. 1 to an insane $469 earlier today.

However, Robinhood’s decision to block the stock buys has (ironically) introduced more volatility, likely causing losses for retail investors. For example, GameStop shares have since plummeted to $234 while AMC’s share price has fallen by about 40%. Users who own the companies’ shares can only sell their holdings.

The whole situation has caused US lawmakers to call for congressional hearings on the matter. “We now need to know more about Robinhood app’s decision to block retail investors from purchasing stock while hedge funds are freely able to trade the stock as they see fit,” tweeted US Rep. Alexandria Ocasio-Cortez, a New York Democrat.