Cybercriminals are taking advantage of the distribution of vaccines against the coronavirus to offer false versions of the drug at excessive prices.

Cybercriminals have taken advantage of the distribution of COVID-19 vaccines to sell fake versions of the drug to users of the ‘dark web’ . The demand is such that the black market for apocryphal immunizers has grown 400% since December 2020 .

Software firm Check Point reported that cybercriminals are scamming users desperate to obtain the drug. They point out that just a month ago, the average price of the vaccine on the ‘dark web’ was 250 dollars , and now it is between 500 and 1,000 thousand dollars in Bitcoins .

Through a statement, the company explained that both the FBI and Europol have warned about this type of scam. In their analysis, they have discovered that many do not offer individual doses, but rather large quantities of vaccines . The intention is to take advantage of the sector with greater purchasing power , who wish to purchase the vaccine for their close circle or resell it. 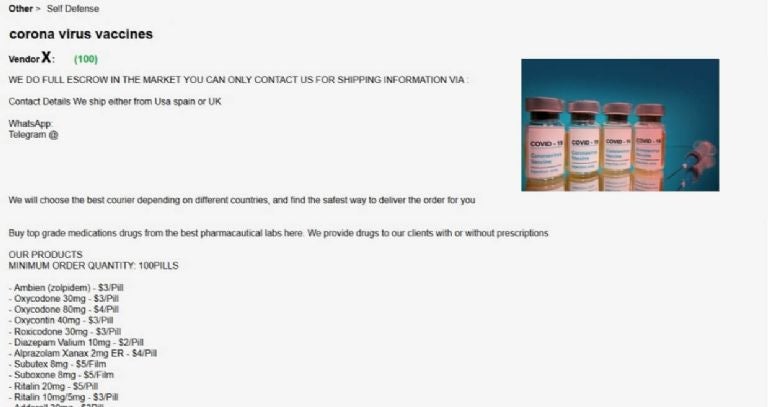 The ‘boom’ of the black market for COVID-19 vaccines is explained by several factors. On the one hand, there is the increase in cases worldwide , as well as the fear of a third wave of the pandemic . The emergence of new strains with a higher rate of virality is also worrying.

Another factor is the variety of vaccines available , the software company claims. In addition to those that have already been approved by the health authorities of several countries, there are more companies developing new immunization options.

The specialists noted that even before the approved vaccines began to be distributed, they spotted advertisements offering “made in China” vaccines . These counterfeit drugs were unbranded and, of course, were not approved by the US Food and Drug Administration (FDA) .

But cybercriminals got caught up, and since the FDA began distributing approved vaccines they have been advertising their branded and named versions. Or, they keep skipping this and just wait for the next dupe to buy them a batch of fake vaccines.