Presidents Day is a holiday for Americans to honor the nation’s past and present leaders. But which presidents should small-business owners pay homage to?

The gulfs between the interests of small businesses often can be vast — a measure that helps one business can often hurt another. Some business experts would add that presidents themselves have only a marginal — if any — impact on the climate for small businesses. Congress, some say, typically has taken the lead role. And just about every president would say that they were pro-small business during their tenure in office.

Despite their wide-ranging job duties — from tamping down terrorism to reunifying the country — some presidents have managed to put small business and encouraging entrepreneurship front and center. To find out which U.S. presidents did the most for small business, Entrepreneur.com asked three people who have studied the subject: Doug Wead, a presidential historian, bestselling author and advisor to two presidents; Zoltan Acs, director for the Center for Entrepreneurship and Public Policy at the school of public policy at George Mason University; and Dan Wadhwani, assistant professor of management and Fletcher Jones Professor of Entrepreneurship at the University of the Pacific. We also spoke with small-business owners about which president they thought did the best by them.
Here’s how nine U.S. presidents measured up on Entrepreneur.com’s review of small-business friendliness: 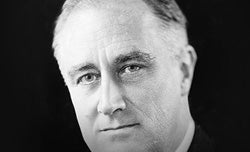 Franklin D. Roosevelt handily won the No. 1 spot on our list of small-business friendliness. Not only did the 32nd president score big points for creating the Federal Deposit Insurance Corporation, or FDIC, which helped restore faith in the nation’s banks, he helped dig the U.S. out of the depths of the Great Depression.

Although some of Roosevelt’s predecessors focused on busting up big-business trusts, they didn’t necessarily intend to create smaller businesses. Roosevelt did. Through the New Deal and during World War II, the Roosevelt administration began to set up special agencies and rules to ensure that small businesses received their share of government contracts, says Wadhwani. For instance, during WWII, the Smaller War Plants Division of the War Production Board sought to increase small-business participation in the war effort. “These efforts at [creating] special programs to support small business were hence a precursor of modern programs,” he says.

Still, a large part of the business community didn’t like Roosevelt because he introduced numerous regulations, which affected businesses of all sizes — and he expanded the government, says Acs. 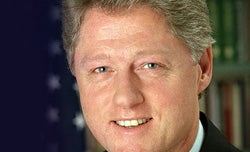 An obvious favorite among small businesses we heard from, Bill Clinton collects the No. 2 spot on our list.

Among the standout small-business friendly policies the 42nd President helped usher in are the North American Free Trade Agreement, which reduced the barriers to trading with Canada and Mexico. He also signed the Omnibus Budget Reconciliation Act of 1993 into law, which reduced taxes for millions of low-income families and made tax cuts available to 90 percent of small businesses.

And despite getting sidetracked by scandal during his presidency, Clinton presided over the country during the longest period of peace-time economic expansion in American history. He also amassed a budget surplus.

Of course, much of those gains stemmed from the dot-com bubble that led to a roughly 40% plunge in the Dow Jones Industrial Average and an economic pullback when it burst in 2000, as one business owner we spoke with was quick to point out. 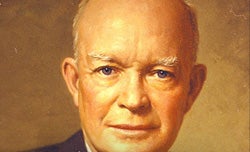 The Small Business Administration that we know today was the handiwork of President Dwight D. Eisenhower. Although his creation would go on to help many of the nation’s small businesses receive guidance and funding for years to come, his aim in creating the agency wasn’t exactly altruistic. Instead, according to Wadhwani, Eisenhower wanted to counter the influence of the Reconstruction Finance Corp., an agency he viewed as having undue power in the private sector. The RFC was established in 1932 to make loans to banks, railroads, mortgage associations and other businesses during the Great Depression and beyond.

Acs thinks Eisenhower’s motives were also targeted at spreading democracy. “The establishment of the SBA had nothing to do with economics. It was about economic freedom,” he says. “In the 1950s, we had all these big businesses gobbling up the smaller firms.” That went against a popular theory at the time that businesses were inherently undemocratic and that smaller, more diverse companies would help encourage competition and democracy, says Acs. “If you just had one big company in the U.S., there would be no democracy.” 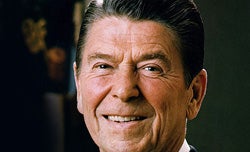 Although he faced several foreign challenges, Ronald Reagan arguably took on the reins of commander-in-chief during a relatively quiet period in international relations. As such, he focused on the economy. The 40th President, who was a big believer in smaller government, also advocated trimming taxes and regulations.

“He essentially reverses the New Deal of the Roosevelt legacy, repositioning the U.S. on the course of economic prosperity,” says Acs.

Specifically, to aid small businesses, Reagan launched the Small Business Innovation Research program in 1982, which reserved 2.5% of federal research and development funds for small businesses. He also passed the Federal Technology Transfer Act of 1986, which required government-run laboratories to actively seek opportunities to transfer technology to businesses and universities. Then in 1988, he signed into law the Omnibus Trade and Competitiveness Act, to gauge and potentially aid U.S. companies’ competitiveness with countries that have large trade surpluses with the U.S.

Despite cutting regulations and the top marginal tax bracket, which a number of business owners told us they considered to be pro-small business policies, Reagan was knocked down to No. 4 on our list because he did attempt to shut down the SBA in 1985. 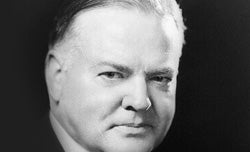 Less than eight months after taking office, Herbert Hoover witnessed the Stock Market Crash of 1929. The ensuing panic devastated Wall Street and nearly eviscerated stock-holder wealth during the next few years. Before hitting bottom in 1932, the Dow Jones Industrial Average would lose 89% of its value.

Although Hoover had served as the Secretary of Commerce under two presidents, he was largely unprepared for dealing with such a crisis, says Wadhwani. Hoover’s belief in volunteerism, the power of businesses working together and with the government did not favor small business, he says. “In general, his belief in rationalizing industry meant dealing with an industry’s big businesses, often around promoting high-wage policies and outcomes that small businesses could not keep up with.”

The 31st President may not wholly deserve the poor marks that most historians and economists usually give him, Acs suggests. “He couldn’t get the economy to recovery and then got blamed for the Great Depression.” 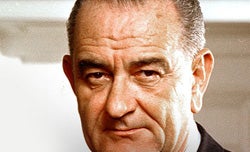 Like his predecessor John F. Kennedy, Lyndon B. Johnson wasn’t seen as pro-business. That notion became cemented when the 37th President expanded domestic safety-net programs such as Social Security and Welfare. He also boosted economic, hiring and environmental regulations and special tariffs — making it harder for small businesses to compete with big firms, says Doug Wead, who had been Special Assistant to President George H.W. Bush.

During this period, big-business lobbyists fought for and received government subsidies to help their clients better compete with foreign companies. As a result, companies such as large fast-food chains were granted subsidies, which put pressure on small restaurants, says Wead. “Thus McDonald’s gets millions from taxpayers. . . while the small hamburger joint down the street pays taxes to support McDonald’s, their big business competitor.”

But, the Johnson administration did consider the SBA and related programs as important tools to help minority-owned businesses in particular, says Wadhwani. 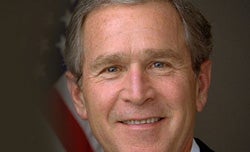 Although George W. Bush had his hands full with preventing another terrorist attack after 9/11, the 43rd President did manage to pass one of the largest tax cuts in U.S. history – putting the government’s budget surplus money back into the hands of taxpayers.

He also moved to trim capital gains taxes and streamline tax reporting requirements for small businesses. He advocated allowing businesses to team up to buy health insurance. And in 2002, President Bush signed legislation that upheld a moratorium on Internet-related taxes for two added years.

But the weak economy took its toll on Bush’s presidency. The unemployment rate during his administration shot up to 6.3% from 4.2%. The national deficit also skyrocketed toward the end of Bush’s presidency when the mortgage meltdown was taking root — highlighting major instabilities throughout the financial system — and eventually led to the financial crisis. 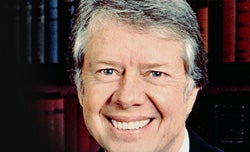 One might think a scrappy peanut farmer from Georgia would have scored higher on our list. But the latter half of the 1970s weren’t kind to Jimmy Carter.

Despite presiding during an energy crisis, a recession and sky-high inflation, the nation’s 39th President did push through pro-business initiatives like the Bayh-Dole Act of 1980, which gave small businesses control over their own intellectual property. He also passed the Regulatory Flexibility Act of 1980 — requiring the federal government to exempt small businesses from certain regulations big businesses had to adhere to.

But he failed to get support from small business groups — specifically, on issues concerning the SBA, says Wadhwani. Though small-business programs expanded during his tenure, a number of controversies and scandals undermined the faith in the job the government in supporting small business, he says. 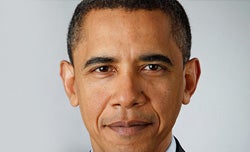 Like President Roosevelt, President Barack Obama inherited a severe economic downturn upon entering office. Although he has dramatically hiked government spending to keep money flowing while consumers have cut back, jobs are still painfully out of reach for many Americans.

What’s more, the 44th President — following on Bush’s policy of bailing out giant corporations like Bear Stearns and American International Group — bailed out the nation’s banks and large automakers. Though he also put through tax incentives for small businesses, many have voiced frustration, feeling that small businesses are paying to help to support big-business bailouts.

Still, Wadhwani says, it’s too early to tell whether or not Obama is small-business friendly. “In many ways, the Obama administration has been actively supportive of small businesses in various tax programs,” he says, adding that the administration’s goal to double exports over five years could be a boon for small businesses. The President has also worked to expanding broadband access across the country and improving the government’s investments in green energy.

How to get vaccinated against COVID in CDMX: These are the documents that older adults must bring