8 out of 10 users have a subscription to the platform.

Spotify dominates streaming in Mexico , according to a study by The CIU (The Competitive Intelligence Unit) With 80.7% of users with an active account, this ranks first, followed by Google Play Music / Youtube Music with 5.1% ( an abysmal difference), Apple Music with 4.5% and Amazon Prime Music with 2.8% . The remaining 6.9% is divided between other platforms.

“This is explained by its abundant content offer, the possibility of listening to music with commercials, as well as attributing it to its foray into the market in its early development stage,” they explain in the study. 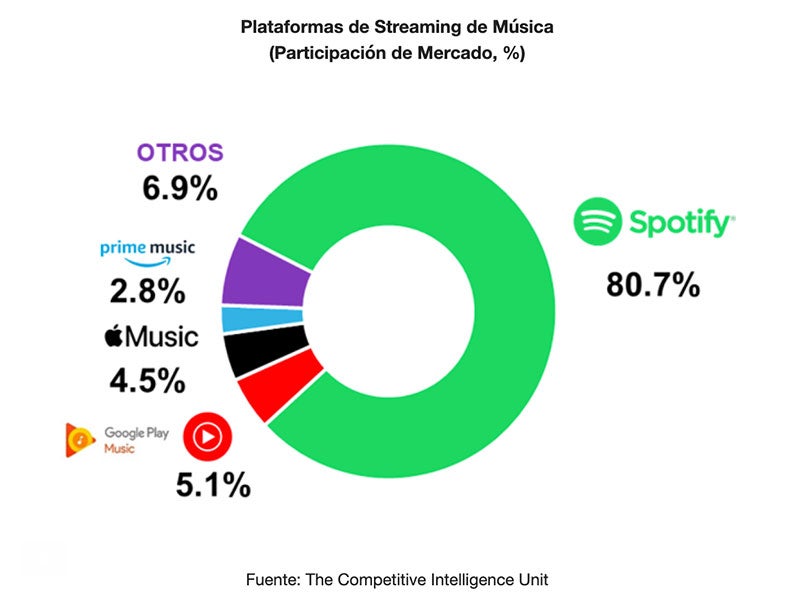 The digital industry has had exponential reach and growth during the pandemic. Not only music creators have launched into the streaming world, but journalists, commentators, comedians, economists and other players have dabbled in this type of platform through podcasts. So the facilities that Spotify has has been the favorite for all these sectors.

The pandemic as a potentializer

In 2020, The CIU ensures that there was an annual growth of 10%, reaching 57.1 million listeners, of which 63.4% are represented by Internet users in Mexico. In addition, music is the main route of consumption during the pandemic.

The offer of new platforms responds to the growing demand and use of digital services, due to the adoption of connectivity equipment.

According to UNESCO data, the cultural and creative industries generate income of 2.6% of the world’s wealth and employ more than 30 million people. And very few have been able to cope with the health crisis when their operation was canceled, but only those who have managed to transmit via streaming can mitigate the effects a bit.

The migration of creators to digital media, due to the pandemic, points the way for all the industries involved to create an ecosystem conducive to innovation and the development of culture and creativity.

Where is streaming music consumed

With a greater availability of time for leisure at home, the access routes to streaming have changed. However, the smartphone leads with 97%, followed by the computer with 33%, Smart TV with 25%, tablet with 23% and the forgotten iPod, with 6%. Do You Have to Pay Taxes on Your PPP Loan?

Population and Housing Census 2020: We are already 126 million inhabitants in Mexico