The recent record high in the price of digital currency raised the total market value of all cryptocurrencies to more than $1 trillion on Thursday.

This Thursday, Bitcoin (BTC) reached a new all-time high, breaking the barrier of $ 40,000 per unit. The cryptocurrency has a winning streak that translates into growth close to 450% in one year.

This week has been quite a roller coaster for the price of Bitcoin. On Monday, January 4, it registered a fall of 17%, after exceeding $ 34,000 a day earlier. Yesterday, Wednesday, the digital currency set a record, trading at $ 35,842.

However, Bitcoin did not stay long at that price. A half hour later, its price fell below $ 38,000 and until the publication of this note it continues to recover. 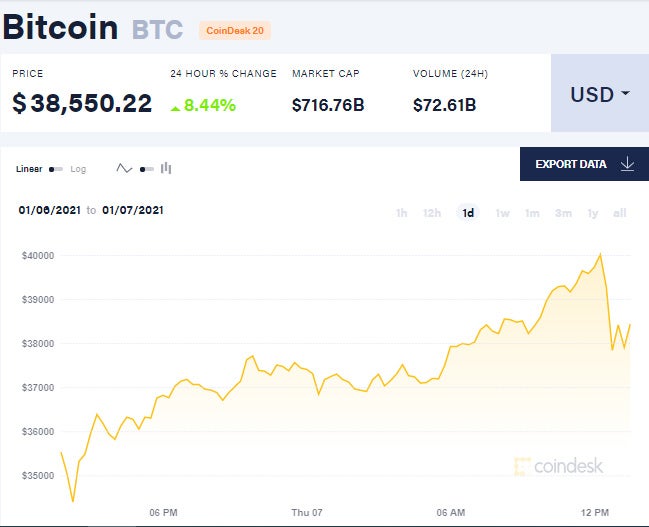 Many investors took advantage of Monday’s drop to buy Bitcoins and benefit from the rally, which had an impact on their appreciation. Other analysts attribute the rapid rise to JPMorgan’s predictions, which predict a price of up to $ 146,000 .

Bitcoin’s new record caused the total market value of all cryptocurrencies to rise to more than $ 1 trillion this Thursday, according to data from cryptocurrency trackers CoinMarketCap and CoinGecko . BTC represents around 69% of the total market capitalization, followed by Ethereum with 13%.

The cryptocurrency is also gaining ground among a larger number of mainstream investors. It is speculated that Bitcoin will be a durable asset and not a bubble as was feared.

Sergey Nazarov, co-founder of Chainlink, said there is a “lack of faith in traditional institutions that is driving this huge rise in crypto assets.”

“While outsiders may view the value of the over $ 1 trillion cryptocurrency industry as an incredibly significant milestone, it is actually still in one of its early stages of development and growth,” Nazarov noted in statements cited by Reuters.

Mexico City Is in a Difficult Situation Regarding the Pandemic